Last week, as people celebrated Mardi Gras and the end of the Carnival period before the beginning of Lent, I had a brief moment of panic.

Frittelle, sugar dusted rice fritters, had been my favorite Carnival-time Tuscan treat. When I realized that this year I wouldn’t be a few minutes away from the nearest bakery selling them I was struck with nostalgia for my days in Florence. They were available at most bakeries and cafes around the city, from about February till April, but my favorite ones were found just a couple of blocks up on the street I lived on. And now, with an ocean between us, I’d have to miss them.

But wait! Why don’t I just make them?

So I Googled a recipe, translated it and recruited Flaneur, my very own in-house Tuscan, to help me make this favorite Italian fried treat of mine.

First, we cooked 500 grams of rice in 1 liter of milk, adding a cinnamon stick, a pinch of salt and grated lemon peel. When the rice had absorbed all the milk, we took it off the heat and let it cool, at which point we added 2 shots of brandy (recipe said rum but I figured brandy would do), three egg yolks, three tablespoons of flour, and 20 grams of baking soda. Lastly we added 3 beaten egg whites. (Note: beating egg whites with just a fork is NOT fun.) 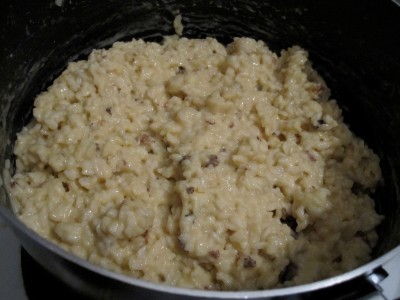 We let the rice mix sit for 15 minutes and in the meantime got the oil for frying ready. We used a standard pot filled with a few inches worth of canola oil. Once 15 minutes had passed and the oil was hot (you can tell because it starts to make hissing, popping noises) we spooned out golfball-sized chunks of rice and threw them in the oil.

Takin' a dip in the hot oil.

We left the rice balls in the oil until they were a warm, golden brown, before taking them out and replacing them with new ones. They were pretty oily so we set them on paper towels to soak some of the oil out.

Finally, once they were all out of the oil, we sprinkled them with confectioner’s sugar and sat down to enjoy our fresh, homemade frittelle di riso.

I’ll be completely honest, our technique could use a tweak here or there but in the end, our frittelle were delicious just the same and maybe even more enjoyable since we made them ourselves. 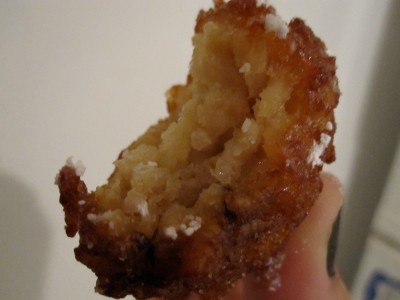 You can’t go wrong with something fried and sprinkled with sugar.