Those Germans knew what they were doing when they brewed this up.

For my 24th birthday, while I was still living in Italy, a few friends and I went on a roadtrip to Munich. My birthday, which falls on the first week of October, also happens to coincide with the last week of the mother of all beer fests, Oktoberfest. Five of us loaded up into a van and drove the 7 hours overnight from Florence to Munich. When we got there, we spent three days drinking delicious German beer and eating nothing but pretzels, sausages and all sorts of other German carnival food. Needless to say, it was a pretty fantastic birthday.

I was sort of indifferent about German culture and food before going, but after those three stein-swinging, ein-prosit-singing, schnitzel-munching days, I became a fan of all things German. So this Friday, when Flaneur suggested we go to Loreley, a Lower East Side German restaurant and beergarden, I was all for it.

Loreley has a full menu of German eats and brews, and thankfully, lots of English explanations of what all the German means. Afterall, I do not sprechen sie deutch. 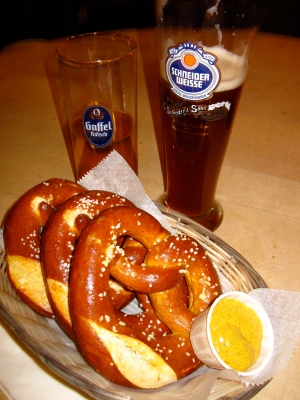 We started off with Drei echte Laugenbretzeln mit Senf which is German for uber tasty, fresh-out-of-the-oven warm and delicious pretzels with a side of spicy, golden mustard. And because it was Friday and time to unwind, we got beers to wash down our bretzelns. Gaffel Kölsch, a Loreley specialty ale from Cologne for Flaneur, and a Schneider Weisse Original, what the menu said was the “Queen of all beers,” for me.

Drinking good beer in big tall glasses really makes you want to swear off drinking things like Bud Lite and really makes you wonder how in the world you were ever able to guzzle cheap beer out of plastic cups all through college. Or at least that’s the effect it had on me.

After practically inhaling the pretzels and all but chugging the beers, we decided to go for round two. This time Flaneur ordered Hofbräu Bock, which is what we drank for those three days in Munich, and it even came in the same stein we had swung around so many times at those long communal tables of Oktoberfest. 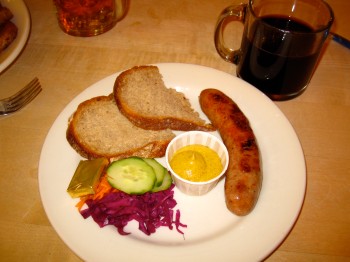 I on the other hand, strayed from the beers and ordered a winter time traditional German drink, Glühwein, or mulled wine. Seeing as how New York had gotten pounded by snow the past couple of days, it just made sense to order something that menu specifically said was “perfect for cold days.” And when it came, the warm aroma of cinnamon and nutmeg wafting in the air made me almost forget that I was in the  city and not sitting around a fireplace in a cozy German cottage. Mulled wine for some reason makes me think of cottages, fireplaces, and inexplicably, elves. There were none here, but I’m just saying.

To go with our drinks we ordered another appetizer, Bratwurst mit Brot, a juicy bratwurst sausage with rye bread and the same spicy yellow mustard that had come with the pretzels.

After we finished, full, toasty and warm, we braced ourselves for the cold street again as we put all of our layers back on —the scarves, hats and coats. It was a ways away but I started to wonder if it’s too early to start thinking about a possible birthday in Munich again.