Every time I go into a cupcake shop I end up having the same dilemma: massive, panicky bouts of indecision.

Ten people get waved ahead of me before I’ve even narrowed my choices down to three or four. Finally, I force myself to go with something and then immediately start second guessing myself.

But now, thanks to a place my friend Vanessa (whose blog you should all read) told me about, I don’t have to wrack my brain trying to pick only one cupcake. At Baked by Melissa, cupcakes are only about the size of a silver dollar, meaning you can get a few of them, without having to deal with the anxiety of committing to just one sweet treat.

Like the cupcakes themselves, the SoHo location of Baked by Melissa, is small. In fact, it’s only a walk-up window.

For $3 (less than the price of just one cupcake at many places around the city) we got three mini goodies. From the nine different varieties to choose from we went with cinnamon, red velvet and cookie dough. The other flavors looked enticing but with three already, I wasn’t complaining. There’s always next time. 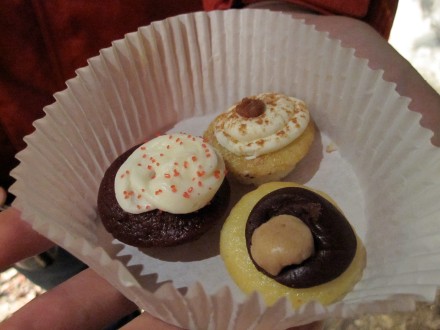 The only thing better than one cupcake is three cupcakes.