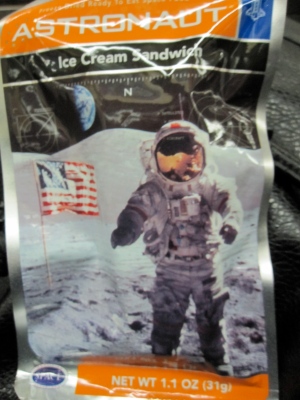 No gelato for this guy.

Back when I was 11 years old, what feels like 5 lifetimes ago, I went to Washington D.C. for a Safety Patrol end-of-the-year fieldtrip. (Yes, I was a Safety Patrol, complete with a fluorescent orange across-the-chest belt with a big, shiny badge. I was a raging dork and it was awesome.)

Of all the things I saw that blew my young, impressionable mind, it was something at the Smithsonian National Air and Space Museum‘s gift shop that excited me the most: astronaut food.

The package said it was exactly like what the real astronauts ate in space, and I was sold. $3 later I ate dehydrated strawberries thinking they were the coolest thing ever.

Fastforward to almost 14 years later… strolling through the American Museum of Natural History’s space gift shop after seeing a show at the Hayden Planeterium, I saw a familiar, over-priced, edible souvenir: astronaut food! 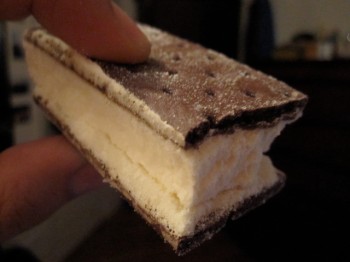 $4.34 later, I left the museum and gift shop with a dehydrated ice cream sandwich alla astronaut, just as excited as I was the first time I tried this gimmicky space food.

Later that night, I tore it open and Flaneur and I bit into respective chunks of crunchy, dry, almost dusty ice cream sandwich. Yes, it looked like an ice cream sandwich, and sure it kind of tasted like one, but in no way was it as good as a real, cold, creamy-on-the-inside, soft-cookie-on-the-outside ice cream sandwich. We ate it none the less, and I for one was glad I never became an astronaut. Sure, space is cool and all, but chalky, dry ice cream sandwiches? No thanks. I’ll stay here on Earth with the creamy, delicious cold stuff.

Few things are more beautiful to me than this enormous hunk of bubbling hot lasagna.
Join 373 other followers