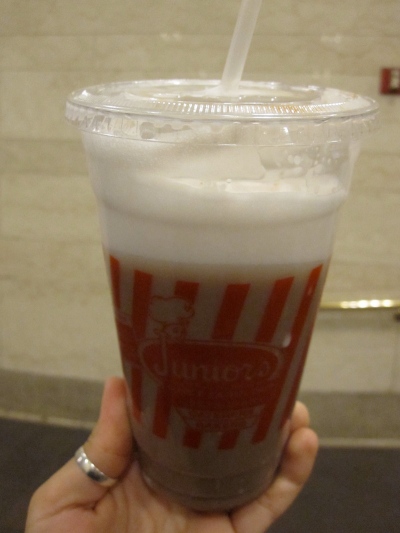 What first drew me in to the classic soda fountain drink most often associated with New York (or Brooklyn more specifically) was its apparent identity crisis. Called an egg cream, it had neither eggs nor cream. Didn’t seem to right to me, yet people seemed to love it. During an episode of Unwrapped on the Food Network, a woman sitting at an old school counter at a drugstore soda fountain went on and on about how great these drinks were.

I, of course, wanted to form my own opinion so recently, I went in search of one to try. Since I was already taking the subway at Grand Central station, I decided to drop by Junior’s on the dining concourse and grab one to go.

I had done my research and knew it was made with milk, syrup (in this case chocolate) and soda water, but I still wasn’t sure what to expect. A big first slurp revealed an unusual taste. Slightly chocolatey with a fizzy, frothy consistency, it reminded me of a Coke float when all the ice cream has melted into the soda. Flaneur didn’t like it but I thought it was interesting. Not particularly great but not too bad either. Nothing involving chocolate can ever really be that bad.