The biggest perk of my job is that I get to attend lots of cool lunches, gatherings and soirées. Last night, for example, I went to an event at The Palace Hotel. The Dorchester Collection, a group of luxury hotels in Europe and the US, was hosting a special reception to showcase some of their glitziest suites in Milan, Beverly Hills, Paris and London. As a play on the word suite, they also highlighted the mouthwatering work of their pastry chefs.

Everything was beautiful, each creation a bite-sized edible work of art. But more than that, everything, both the savory and the sweet, was delicious. 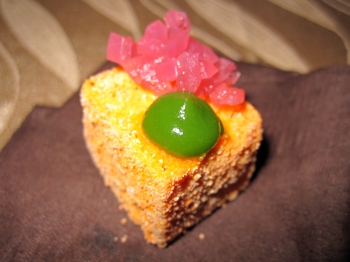 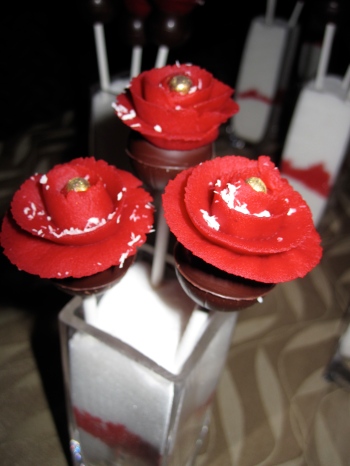 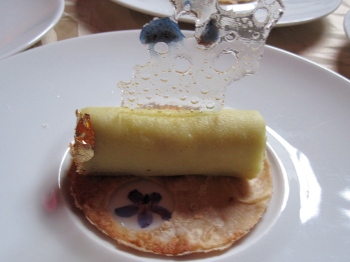 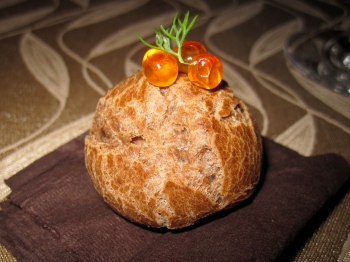 Pumpernickel with Gruyère and salmon roe 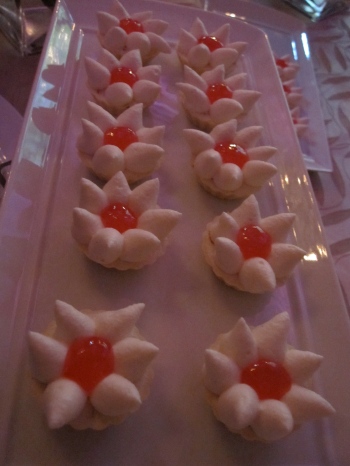 Meringue tart with orange center from The Beverly Hills Hotel 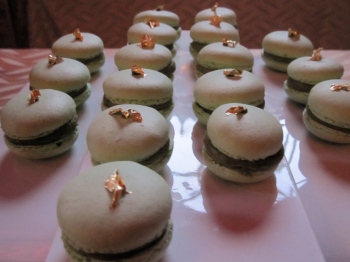 Now if only my job only involved stuff like this. Wouldn’t that be sweet?

I was on the phone with my mom recently when she asked me if they sold yucca in New York City supermarkets. I told her that with the amount of Hispanic people in New York, Dominicans, Puerto Ricans, and every other nationality south of the border, I was sure they did. I had never seen it myself but that’s just because I never looked for it.

Yucca, a starchy vegetable which is actually the thick, gnarled root of the plant it’s part of, was just as commonplace in our kitchen, if not more so, than your standard potato in a regular American household. My mom cut off the thick, ugly brown exterior to reveal the white, fibrous inside, which she then either boiled, mixed in soup, mashed, or fried. 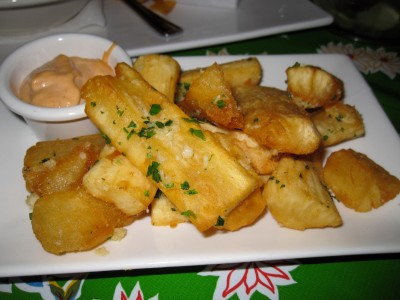 “Ok, well I think I’m going to mail you some,” she announced.

I imagined myself opening a box at work, where she usually sends my packages, and pulling out the large, ugly, almost turd-like yucca roots. What would I even do with that? My flimsy set of butter knives and the one fruit paring knife I own wouldn’t know what to do either when attempting to get through the yucca’s tough outer layer.

Thankfully, I was able to talk her out of it. END_OF_DOCUMENT_TOKEN_TO_BE_REPLACED

And on the seventh day, God created brunch.

Sundays, lazy ones that start when you roll over in bed and marvel at the restorative powers of sleeping in, are made for brunching. In New York, where the options are limitless, brunch on a rainy Sunday morning/afternoon is a wonderful thing. No one’s in a hurry. Everyone wants to rehash their weekends. And almost everyone can go for a bloody Mary or mimosa. It just makes the impending blow of Monday that much easier to deal with.

So when my friend Holly, who was in from out of town visiting her old roommate, told me they were going to brunch, I happily tagged along. There was talk of an all-you-can-drink special and the food being good, but I didn’t need much convincing. They had me at “brunch.”

While I typically associate brunch with the standard American breakfast staples like pancakes, scrambled eggs and sausage, I also welcome variations. This Sunday, our destination, as Flaneur and I huddled together underneath a too-small umbrella and made our way down to Alphabet City in the East Village, was Mercadito Cantina. 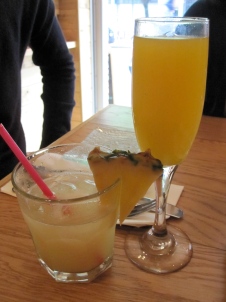 A small but cute and cheery taqueria, Mercadito Cantina’s brunch menu had classics like eggs (scrambled, benedict and sunny side up) but dressed up with spicier,  more exciting ingredients like habanero peppers, roasted garlic and pico de gallo. Even the mimosas had a little more pizzazz, and so that’s exactly where I started.

The mango mimosa I ordered came in a champagne flute but unlike its orange counterpart had a little spice at the end of each sip, courtesy of a bit of green chile added to the orangey-yellow drink. The mango, which already has a strong, tropical sweet taste, felt even more exotic when it was mixed with the fizz of the sparkling wine and the subtle zing of the green chile. END_OF_DOCUMENT_TOKEN_TO_BE_REPLACED 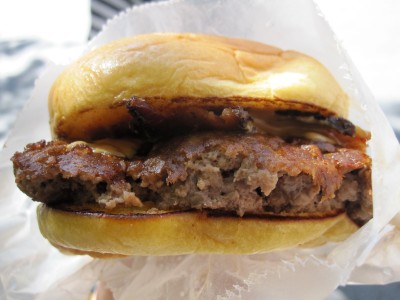 My boyfriend just came back from spending two weeks in the motherland (Italy) and I wanted to make sure that his return to the Land of the Free and Home of the Brave was great so he felt happy to be back. And nothing says Welcome-to-America like a juicy hamburger topped with bacon and smothered in peanut butter. Yes, peanut butter. On a burger. With bacon. END_OF_DOCUMENT_TOKEN_TO_BE_REPLACED 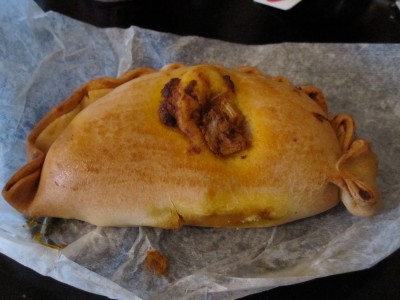 Growing up in Miami in a half Hispanic family, I ate a lot of empanadas. My mom made them, her friends made them and gave them to us, we bought them at bakeries where they only spoke Spanish. The warm pastry pockets were always around, always stuffed with something different from beef to cheese to veggies.

When I lived in Italy, where empanadas are non existent, one of the students at the school I worked for made some and brought a plate by my office.

Empanadas, it seems, are destined to always be in my life. (As it turns out, I even tried my hand at making them and lo and behold, they weren’t bad, bringing the total of things I can successfully make in the kitchen up to about four.) END_OF_DOCUMENT_TOKEN_TO_BE_REPLACED 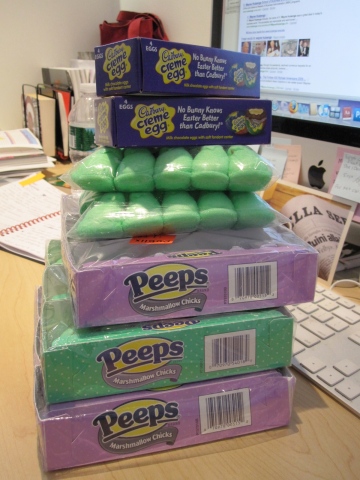 Some bunny loves me...

Friday night as I unwrapped the foil from the last Cadbury creme egg I had left and bit into the chocolate shell, I thought, “Well, this is it. Till next year, dear Cadbury egg. It’s been fun.”

Flash forward to Monday afternoon. I’m trudging through this most dreary of all work days when I get a package from my sister. I recognize her goofy bubble writing and neon green ink from one of those gel pens that were all the rage in high school.

I open it, not knowing what to expect. As I peek in the box, I realize Easter is not done with me yet. Inside are not one or two or even three, but rather FIVE boxes of Peeps and two boxes of Cadbury eggs for a total of EIGHT eggs.

As I transfer what looks like the entire contents of Publix’s Easter clearance shelf into my bag, I think, “This is ridiculous.”

But thank God for family understanding our ridiculous ways.

Seriously, America deserves all the bad-talk it gets from countries like Italy when it comes to food sometimes. The things we come up with really go above and beyond what is already disgusting, obesese, ridiculous and just absurd.

To see what I’m talking about, read this. It’s funny, but after you stop laughing, don’t you kinda just feel gross?

Getting mail, real, tangible, paper goodness “snail mail,” whether a letter or a package, is one of my favorite surprises. I say surprise because the times that I actually get to enjoy this small pleasure are few and far between. News, invitations, announcements, hell even bills come via the computer. My apartment’s mailbox mostly collects a lot of junk mail and not a lot else. 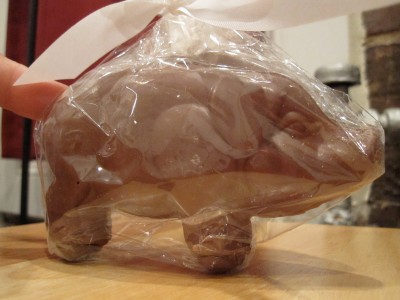 So yesterday, when I went to check the mail, I was elated to see a big, fat envelope folded and squished into the small mailbox. It was from my friend Terry in D.C. who I hear from every so often but wasn’t expecting anything from. When I opened it, along with a handwritten note (another small pleasure) and a couple of newspaper clippings (including one on the recent death of Thomas Angove, inventor of the wine box), there were two edible inclusions. One was Vietnamese flour for making savory pancakes (read about it soon on in an upcoming post) and the other was a belated Easter gift, a chocolate pig. (Terry, you see, works for pork lobbyists in D.C.)

I was happy enough as it was to have a real piece of mail in my hands, but to then have chocolate inside, well that was just awesome. Thank you, Terry, for the nice surprise, and thank you chocolate piggy, for being just what my empty mailbox needed. 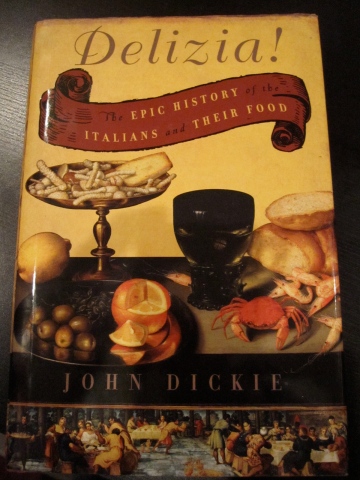 For the educated glutton

It took me forever to finish, but I finally did it. I finished John Dickie’s “Delizia! The Epic History of the Italians and Their Food.” Normally I breeze through books (the ones I like anyway) but this one was so detailed in its historical account of Italian food that I had to make my way through it a little more carefully, a little more slowly.

The book starts in Medieval Italy (which wasn’t actually Italy back then) and works its way through the Renaissance, papal scandals (yes, they’ve always existed), the official establishment of Italy as the country we know today, the late 19th century and early 20th century flood of Italian emigrants, the first World War, the rise and fall of Mussolini and the second World War, and finally through the second half of last century and into the current one.

It was intense in its attention to historical detail but definitely a good read. I’m not a huge history buff, but history told through food? Well, that’s more my style. 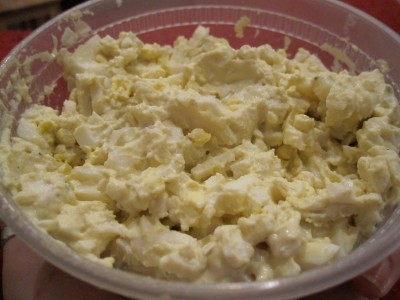 In my opinion, egg salad is the unsung hero of the deli. As people order their sandwiches, bagels, coldcuts and cheeses, they often overlook the egg salad. But not me. I love egg salad, and sometimes when I walk into a deli, that’s all I get.

“Anything else?” the person behind the counter will ask, waiting for the rest of my order.

“Nope. Just the egg salad, thanks.”

Today while at work, I was randomly struck by a craving for egg salad. Since my boyfriend is out of town and therefore not around to make sure I have a balanced meal, complete with protein, veggies and all the other things he often harps about, I thought, “Great. It’s decided. I’m having egg salad for dinner.” While I’ve had it at a few places between my office and my apartment, the place I had in mind was one I’d never been to. It wasn’t even technically a deli either. 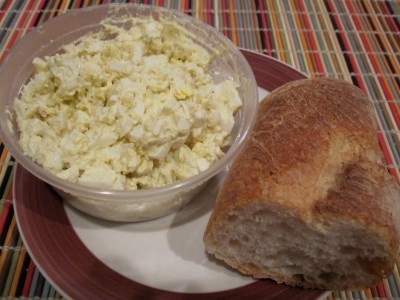 Egg salad follows a pretty basic recipe: boiled eggs, mayo, mustard, salt, pepper. So when I read that Lamazou, a small cheese shop in Murray Hill, a block away from my apartment, adds Roquefort to their egg salad, I knew that was the one I wanted.

And sure enough, Lamazou’s version did not disappoint. It was just the right shade of pale yellow (too yellow means too much mustard… throws the whole thing off), and was the perfect creamy yet chunky consistency (too creamy means too much mayo…slimey and gross). The special ingredient, the Roquefort, gave it just a hint of that salty tanginess the moldy cheese is known for without overpowering the whole thing.

And while it might not have looked like much, my small container of egg salad and the hunk of baguette I ate it with, actually made for a very filling dinner. My boyfriend might not have approved, but for tonight, I was ok with egg salad hogging up the spotlight.