Growing up in Miami in a half Hispanic family, I ate a lot of empanadas. My mom made them, her friends made them and gave them to us, we bought them at bakeries where they only spoke Spanish. The warm pastry pockets were always around, always stuffed with something different from beef to cheese to veggies.

When I lived in Italy, where empanadas are non existent, one of the students at the school I worked for made some and brought a plate by my office.

Empanadas, it seems, are destined to always be in my life. (As it turns out, I even tried my hand at making them and lo and behold, they weren’t bad, bringing the total of things I can successfully make in the kitchen up to about four.)

It had been a few months since I’d had one so when a friend suggested empanadas as an afternoon snack to hold everyone over till dinner, I was all for it. Sweetheart Bakery, in the West Village, was stocked full of all sort of delicious looking baked goods, including cookies with broken Oreos jutting out of them, pastries oozing with what looked like cheese and garnet colored jam, and empanadas piled on top of each other in beautiful heaps. 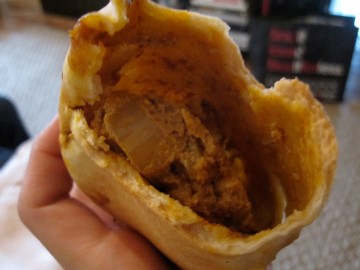 Because Argentineans are known for their empanadas and all things meat, the logical choice would have been to go with the authentic Argentine beef empanada. But being a die-hard pumpkin fan I was much more intrigued by the pumpkin and scallion empanada.

“Sounds a little weird,” said one friend when I ran the idea by her.

And as it happens from time to time, the illogical choice was the way to go. I had expected the filling to be sweet and orange in color, like the pureed pumpkin used for pies, but the chopped scallions and whatever spices they added made it a darker, warmer color and gave it a savory, creamy rich taste. The pastry part was the perfect thickness of dough, not too thick and bready, and baked to a nice softness so that it wasn’t tough to chew or crunchy around the sealed edge.

Most of the empanadas I’ve ever had were made with ground beef, chicken, and all manner of veggies like peppers, onions and olives but never pumpkin.  Next time I’m jonesing for an empanada, I know where to go. Speaking of empanadas and going places, I should probably just plan a visit to Miami.

10 thoughts on “The Hispanic version of a Hot Pocket”

Just the loveliest fig leaf martini there ever was.
Join 373 other subscribers