Appetizers are the foreplay of meals. Great appetizers get you in the mood, they get you excited about what else lays in store for you. Similarly, bad appetizers can get things off to a bad start, leaving you wondering if the rest your experience will be any better. Sure, you can recover from a bad appetizer with a good entree but those points will always be deducted from the overall performance.

Last week, Flaneur and I, enjoying our last days together in New York, went on a serious restaurant bender. I don’t think we ate at home the whole week. It was glorious. One night, we went to Momofuku Ssäm Bar, which had long been on our to-do list. While everything we ate at this East Village hot spot was mouthwatering in its perfection, it was the appetizers that really did it for me.

Bread and butter is a pretty standard pre-entrée feature at most restaurants, from high-end to low, but the bread and butter on this menu was anything but average. Two warm, toasted baguettes came with two ramekins: one with a creamy, pale yellow butter mixed with sea salt and the other…oh, the other… that little ramekin of deliciousness… brace yourself… was filled with whipped lard. 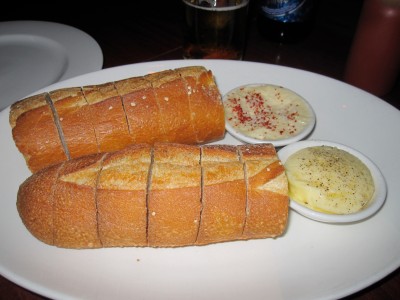 Bread and butter... but better

Yes, lard. Those of you reading this will fall into two distinct groups. Some of you will be horrified. You’re thinking, “Ugh, she’s finally gone too far. She’s eating straight up fat now.” The rest of you I hope, will have had lard before and will now that in small doses and executed correctly, it can be a wonderful, amazingly delicious thing to be savored and drooled over. I felt like the first group until I lived in Italy and was given a crunchy piece of toast straight out of the oven with a thin, translucent slice of lard melting over it. It was simultaneously one of the fattiest and most delicious things I’ve ever eaten. But whipped lard? We’d never heard of that before, but it seemed like a good idea. And it was. At first, we were civilized, using the butter knife to delicately spread the lard over the toast, but after the second or third piece, both of us were using the bread to scoop big globs of lard, leaving the ramekin shiny and clean.

Look at the buns on that one!

Next out was our second appetizer: steamed buns. Inside each soft and supple steamed bun was a fat hunk of juicy pork belly, with cucumber and scallions, all drizzled in hoisin sauce. Pork belly is fast becoming my absolute favorite thing to come from piggies, and these buns definitely had something to do with that. So soft, salty, tangy, and just perfect… I could’ve skipped my entrée and just had several plates of these mouthwatering buns.

The rest of our meal was great too but I won’t get into detail about it. This place had me at their appetizers. After such a crazy delicious start, it didn’t take much to push me over the edge. Sure, we could’ve skipped the appetizers and it would’ve still been a good meal but  why jump right into the action when working up to it is so much more fun?

4 thoughts on “The importance of appetizers”

On the rare occasion that I walk by @ursula_brooklyn and there isn’t a line snaking down the sidewalk, I pretty much have to take it as a sign that I need to go in. It happened today and they had one of my favorite foods ever as a special: squash blossom quesadillas, this one with ricotta and dandelion green stuffed squash blossoms, green chile, quesillo, pecans and roasted corn and a great green chile tomatillo salsa. Kismet!