I had been walking without a break for the better part of two hours. With no particular destination in mind, I just kept roaming, occasionally checking in with my map to get an idea of where I was.

But then I saw something across the street and realized the time had come for a break—a cupcake break.

I had read about Kara’s Cupcakes in my trusty guidebook and made a mental note to check it out sometime. When I randomly bumped into it, I figured now was the time.

Behind the shop’s glass case was row after row of cutesy little cupcakes. At first glance they all looked similar: chocolate or vanilla topped with chocolate or vanilla frosting with some small decorative detail on top. But taking a closer look I saw they were all different: banana, passion fruit, java, strawberry cream, coconut, peanut butter, s’mores. 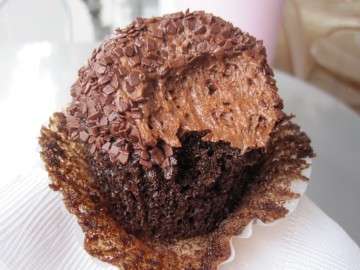 Feeling chocolately instead of fruity, I ordered the chocolate velvet cupcake and sat outside to enjoy it with the cool San Francisco breeze. After the first bite I immediately wished I lived closer to Kara’s. The already delicious moist dark chocolate cupcake was made even better with a fat dollop of creamy, mousse-like bittersweet chocolate buttercream, coated with a layer of chocolate flecks. This cupcake’s title was definitely a reference to the icing. Sweet without being overly sugary, the buttercream was soft and smooth, absolutely velvety on the tongue.

I had to muster every little bit of will power I had to not rush back in and order another cupcake. I’m pretty sure long walks to Kara’s might become a weekend ritual for me.