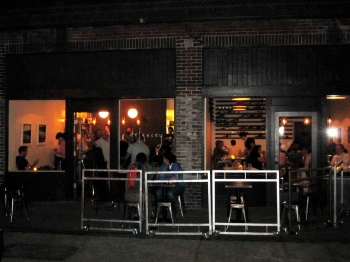 Blogging is a strange thing sometimes. Like many people who write their own blogs, and also many who don’t, I follow several people’s blogs. Some of these people, these other bloggers, are people I know— people I’ve met, people I hang out with, people I’m friends with. When they write about their travel adventures through Asia, the trials and tribulations of single life in New York, their jobs as librarians or vegan cooks, I know who they are. I know the people they reference or the places they’re talking about, or sometimes I can just picture them clearly in the situations they write about.

But with other blogs it’s different. I don’t know people at all. I find out about their blogs through friends, or linked on blogs I already follow, or mentioned in magazines, or through random searches.  I read about their babies, their lives in other countries, the meals they eat in different cities around the world. But I don’t know them. I might never meet them. I’ll probably never stand in the exact spot of something personal they’ve written about.

Except I did. This past weekend in Seattle.

Like many people, because this person has many devoted fans, I follow the blog Orangette.blogspot.com. It’s a really sweet blog, a mix of recipes with personal stories from author Molly Wizenberg’s life sewn in around them. It’s simple, but funny and cute. I read it and feel like Molly might be someone I was friends with a long time ago, an old friend I’ve fallen out of touch with. Her tone is always familiar and conversational. And her recipes? Oh they’re good. They always make me wish I was a better person in the kitchen. They make me want to buy cooking utensils and learn how to use them. 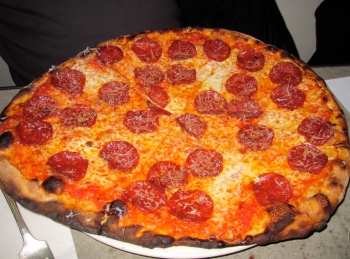 About a year ago, Molly and her husband Brandon Pettit (side note: he started out as a reader too before he met and married her!) opened Delancey, a pizzeria in Ballard, Seattle. On Orangette, Molly’s written about the whole process of starting a restaurant and most recently wrote about Delancey’s one year anniversary.

Truth be told, when I planned my recent trip to Seattle, I completely forgot about Delancey. It wasn’t until a friend and fellow Orangette reader reminded me, that I put it on the weekend’s to-do list. And so it was that in a city that wasn’t my own, and with three other people who actually do live there, the restaurant recommendation came from me, the out-of-towner.

We walked up to Delancey and not surprisingly, it was packed. Through the window fronts we could see all the tables were full and people clustered outside, waiting for their names to be called from the list. No reservations, either. We had to send someone from our party over to put us on the list and then came back an hour and a half later.

Once inside and seated with menus on our tables, I noticed that Delancey actually looked like Orangette. If the blog became a room, this is what it would look like. The overall look was clean, no fuss or excess, and the framed photos on the walls looked like the ones on the blog. 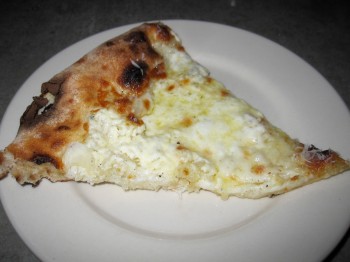 A slice from the White Pie

And then there was the pizza. That delicious, cooked-to-thin-crust-perfection, served-straight-out-of-the-wood-fire-oven pizza! I don’t throw around praise like that for any ol’ pizza. But Delancey’s was good.

My cousin (the reason I went north in the first place) ordered the pepperoni pizza, a delicious, pretty evenly covered-in-pepperoni-slices pie, with a thin crust and a crunchy, lightly burned (in a good way) edge. The fresh and aged mozzarella coating the crust was gooey and wonderful and a thin layer of Grana shavings sprinkled on top added the perfect touch. It’s hard to go wrong with two cheeses.

Our two other dining companions split the white pie, a delightfully cheesey, sauce-less concoction of housemade ricotta, the double mozzarella combo, Grana and garlic. While I’m definitely pro-sauce all the way, I couldn’t turn down a slice of this white one. 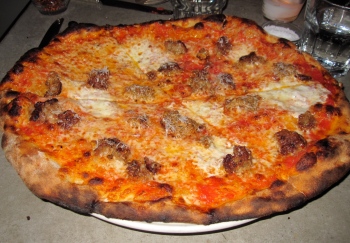 And last but not least, there was mine, the sausage pizza. The menu said housemade sausage and when I asked our friendly hipstery waitress what she recommended her eyes lit up when she said sausage. Sold. And boy, was she on to something. Each little chunk of juicy sausage was a burst of subtle spicy flavor as it mixed with the crispy crust, the melted mozzarella, and the tangy tomato sauce. The same shower of Grana shavings added a dry, salty touch to go with all those other competing flavors. The winner in this situation? Me.

My only regret was not getting dessert. When Delancey opened, Molly was in charge of the sweets (she wasn’t there the night I was and I’ve read she spends less time there now anyway) while her husband manned the pizza department. But as I always like to think in situations like these, there’s always next time. And now that I’ve been there, I can put Orangette in the category of places I actually know.