I would love to hear the scientific explanation behind greasy food being so richly satisfying when you’ve been drinking. That’s a lie, actually. I don’t really want to know the science behind it because science isn’t really my thing. I rather just skip to the good stuff: the greasy food.

Recently, during a night out with friends, someone suggested getting something to eat after our first drink and before several more that were to come after it.

Mango chicken at Yamo: cheap, greasy and obscenely filling. Everything I look for in my drunk munchies.

“Well, what do you guys want to eat?” asked one person I was with.

“Something greasy,” was the fast and firm answer from someone else.

This night could’ve been any night, in that when is that not the answer?  I mean the above dialogue happened between two people I was with but really, I’ve had that same dialogue internally with myself. Sometimes when I’m sober, I actually want a salad, or some fruit, or a bowl of oatmeal. But after a few drinks? I want greasy pizza, street meat and Mc Donald’s.

On this most recent occasion, a friend had a better idea, (thankfully sparing us all from the golden arches).  In response to the request for greasy, we found ourselves at Yamo, a tiny, almost literal hole-in-the-wall Burmese lunch counter in the Mission.

We took the last few spots at the counter (of which there might’ve been a total of about 10 only) and quickly ordered food. The three ladies behind the counter were all no nonsense, and because they were dealing with a packed house, there was no time for dilly-dallying. 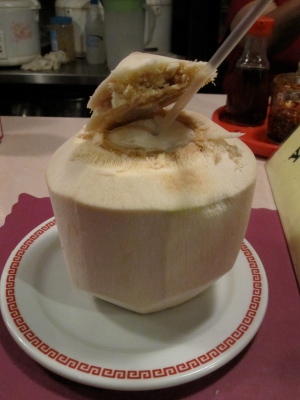 Coconut juice straight out of the coconut

Not long after, a plate piled high with white rice and mango chicken was slid in front of me. Yes, it might’ve been a tad on the greasy side but that just made it all the better. Fat chunks of mango, juicy strips of chicken, thick carrot wedges, onions and peppers— not only was it a hell of a lot better looking than a late-night Happy Meal (side note: that’s not a nickname. I really do order Happy Meals. What can I say, I like the toys.) but as soon as I mixed it all up and dug in with my chopsticks, I confirmed it was in fact the perfect thing to be eating at the moment. And with all those veggies tossed in there (albeit under a healthy coat of oily goodness), I could almost convince myself this was a healthy balanced meal! Carbs, veggies and protein! Hot damn, that’s a balanced meal if I ever saw one.

And if that wasn’t enough, I didn’t just wash this all down with a beer or soda (mostly because Yamo doesn’t sell booze) but instead with coconut juice… still in the coconut. I mean really, you just can’t get this kind of stuff from corner street vendors, 24-hour drugstores and definitely not ever at Mc Donald’s (all places I’ve frequented when coping with the drunk munchies).  And that’s something to cheers to.

Few things are more beautiful to me than this enormous hunk of bubbling hot lasagna.
Join 373 other followers