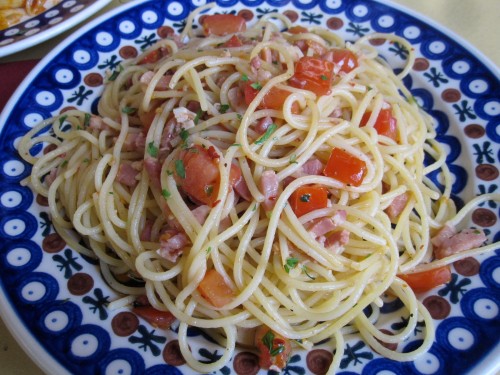 Everything happens for a reason. However, I did not purposely leave the dress I was supposed to wear to the wedding hanging in the closet at my boyfriend’s house so that we would have a reason to go back to Florence and then have lunch while we were there. Really. I didn’t. It just worked out that way.

So there we were, driving back toward Florence from Lucca. Yes, we needed to time everything so that we could be back in time to get ready for the wedding but there were other pressing matters at hand.

Deciding that we would rather avoid the nightmare that is driving and parking in the center of Florence, we instead opted for a place just outside of the center, i.e. where I’d be sure to be the only American around.

We had been to Caffe Dogali before, usually on lazy weekend afternoons when we’d wake up late with growling stomachs. It’s a small osteria and bar near the stadium, part tobacco shop and sandwich counter inside with a small dining room in the back and a little square of outdoor seating in the front.

Though lots of people around us (namely awkward looking Italian teens with identical shoes and bad hair) were eating delicious looking panini made with giant pieces of gold-colored focaccia, we both wanted pasta. 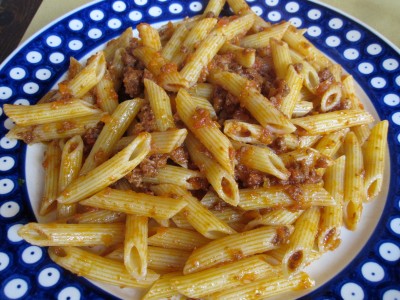 Flaneur went with the tried and true penne al ragù and I was intrigued by the one thing on the menu I didn’t understand, spaghetti alla vigliacca. (In my own defense, the italian bf didn’t know what alla vigliacca was either. So we asked the waitress.)

The penne al ragù were simple and amazing, a mound of pure pasta perfection. Cooked to that precise al dente point of ideal firmness and coated with a rich, meaty ragù, it was comforting, filling and utterly delicious. I could make this dish every day of my life for the next 75 years and it would probably never come out this good. (Hmm, possibly something I need to put on my list of “life’s goals.”)

Spaghetti alla vigliacca turned out to be an even more simple dish of pasta tossed in olive oil, chunky bits of pancetta, fresh hunks of tomato, basil and a little bit of garlic and pepperoncino to give it a subtle spicy heat. Heaped high on its beautiful blue and white ceramic plate, it was almost too beautiful too eat, all those bright bold colors glistening in the afternoon sun. But let’s face it, nothing is ever too beautiful that I won’t eat it. And good thing, because the spaghetti alla vigliacca were phenomenal! It never ceases to amaze me how Italians manage to throw things together so easily and yet manage to end up with something so absolutely delicious.

As I told Flaneur while we ate “I may think there’s a lot of things wrong in this ass backwards country, but if there’s one thing I’ll never take away from you guys, it’s the food.”

While I’m sure fantastic food would’ve just as easily been found in Lucca, I was glad I left my dress in Florence. Even if after that mountain of carbs it might’ve been a little more snug than before.

One thought on “Pasta perfection”

The last time I had food poisoning was because of sushi, so it was a good thing that today’s sushi— with shrimp tempura, salami, fried cheese, cream cheese and sweet plantain— was so very different from the one that made me sick.