Which is why it was annoying me that I hadn’t been to Please Don’t Tell yet. I had been to Crif Dogs, the East Village hot dog shop with the phone booth that you have to go through to get into the not-so-secret speakeasy, but never actually inside the bar itself. The place is small so reservations, which can only be made by calling at 3pm the day of, go pretty quickly.

But recently, I got let in on the secret, and so now I’m gonna blab about it, because even though the name is please don’t tell, everyone knows half the fun is in telling. 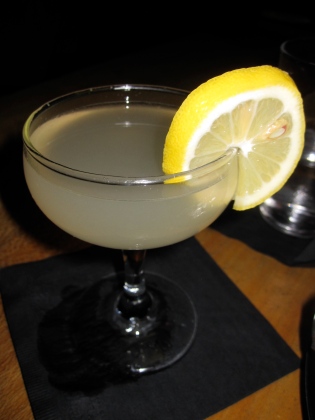 Once inside and past the phone booth, PDT is small and dark with a low ceiling and cozy leather booths. Stuffed, mounted animal heads stare down from the walls, and over our booth, a creepy weasel-like critter looked over us.

The novelty of the whole speakeasy bit is cool, but really the best part of PDT are the drinks. Forget about rum and Cokes or gin and tonics. Drinks at PDT are carefully crafted concoctions with lots of interesting ingredients and unusual twists.

Intrigued by anything with chocolate, I was instantly drawn to the Hungarian Rhapsody, a sweet libation of Plymouth gin, Zwack (a Hungarian liqueur made of herbs and spices), cream soda (which is, for the record, my favorite soda) and chocolate and orange bitters. It was a warm amber color, like a clear butterscotch  and each sip was smooth and sweet.

Flaneur, whose palate works in complete contrast to mine, was attracted to the Rosemary Society, which as the name might suggest, had rosemary as an ingredient in addition to the Tanqueray gin, Clear Creek Pear Brandy, and lemon and grapefruit juices. Unlike my drink, which had an almost candyish sweetness, the opaque Rosemary Society was tangy and citrusy with a subtle herbal bite from the rosemary.

They’re definitely not the kind of drinks you have lots of (partly because of their costing $15 a pop) or slam one after the other to get drunk. But a good secret is like that. The best ones are always about quality and not quantity.