Foundations of Rice Krispies treats and driveways paved with chocolate, roofs topped with M&Ms, and cookie walls held together with icing. You’d think it would be my dream home, but somehow Gingerbread houses always seem to disappoint. Icing gets crusty, gumdrops get hard, and to be honest, I’m just not crazy about gingerbread itself.

A recent trip to the Gingerbread Extravaganza at Le Parker Meridien proved to be no different. While the gingerbread creations on display were cool and the theme was fun, “Movies made in New York,” the word extravaganza was perhaps a bit strong. It wasn’t so much of an extravaganza as it was about six different designs from bakeries around the city, each in a glass case, in a small area off the hotel’s lobby. 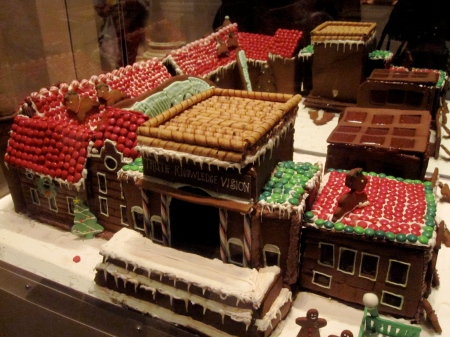 A Night at the Museum by Soutine Bakery

From Soutine Bakery, was this fun gingerbread replica of the American Museum of Natural History from the movie A Night at the Museum. I particularly enjoyed the red M&M-covered roofs and the rolled wafer top above the entrance…mostly because I could eat (and have before) a sickening amount of  both of those. Also, you can’t really see it, but there’s a cookie T-Rex standing in the courtyard-like area of the museum. Points for edible dinos. 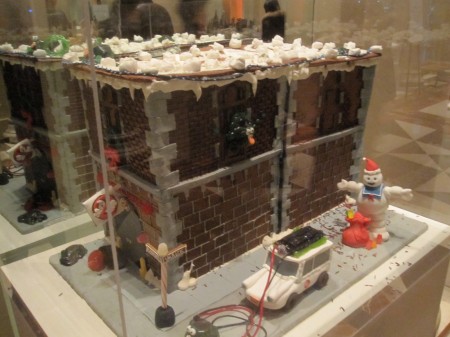 This gingerbread “house” by Tribeca Treats was cool because it recreated the Ghostbusters station, complete with the Stay Puff Marshmallow Man and the Ectomobile, but really, I think given all the right ingredients, I could make the same structure myself. I dunno, am I being too harsh? 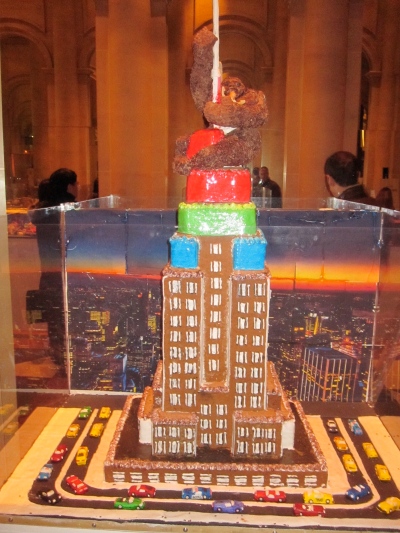 And of course, they couldn’t have the theme they had without King Kong being represented, so the hotel’s very own restaurant and brunch hotspot, Norma’s, made the classic gorilla-topped Empire State Building,

I think my main problem with gingerbread houses (or in this case, movie scenes) is that for being something made of cookies and candy, I never have a strong urge to eat them. And that sort of weirds me out. Then again, I guess there should be at least one thing during the holiday season that I don’t want to devour immediately.

One thought on “Gingerbread Tinseltown”

The last time I had food poisoning was because of sushi, so it was a good thing that today’s sushi— with shrimp tempura, salami, fried cheese, cream cheese and sweet plantain— was so very different from the one that made me sick.