While New York is far from lacking in places to get baked sweets—what with cupcake shops, bakeries, patisseries and all other manner of baked-good providers available everywhere—if there’s one thing I miss about Miami, it’s the ready availability of Cuban bakeries.

Growing up in Miami, these pastries were always around, whether you were Cuban or not. During high school my sister even worked at a Cuban bakery called La Rosa, where the uniform was a terrible, oversized magenta smock that I loved to make fun of her for. But if she came home with a box of pastelitos? Well, then my tune changed to a little butt kissing.

During my latest stay in Miami, the last thing I did before leaving the city was making one last stop at La Rosa to pick up some of my favorites.

First of course, was the classic, the delicious, the dearly missed icon of pastelitos: the guayaba con queso. Thin layers of crispy dough with a sticky, gooey filling of ruby colored guava jam and soft cream cheese. It really just doesn’t get better than this. 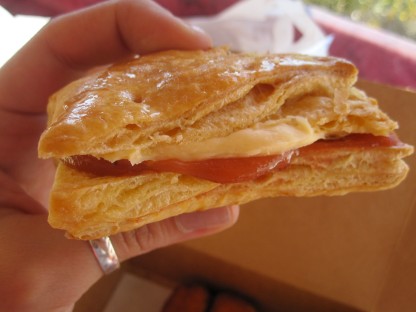 Next was a totally different type of treat, but one that I also hold just as near and dear to my sugar-loving heart: tres leches. Some people don’t like it, saying it’s just too sweet. I, clearly, am not one of those people. I love this cake, and its moist, triple soaked (condensed milk, evaporated milk and heavy cream) sweetness, made it even sweeter and creamier with a fluffy layer of white frosting. The whole thing tastes of straight sugar, egg whites and cream. And it’s awesome.

Finally, though not  actually a pastry, was another classic found at Cuban bakeries and eateries all over Miami: natilla.  This thick pale yellow custard, made from sugar, eggs and vanilla extract is like a cool, creamy version of vanilla pudding, but when it’s done right, like at La Rosa, it’s really so much more than that. Sprinkled with a little bit of cinammon, it’s just shy of heaven.

Unassuming in appearance, wonderful in taste