One bite in and it hit me. Pure, unadulterated joy. My whole body tensed up, my eyes squeezed shut, and inside my boots, my toes curled. It took everything in me not to slam my open palm down on the table over and over, screaming “Yes! Yes! Yeeeesss!”

Dinner at The Spotted Pig was a series of foodgasms, one right after the other. One had barely subsided when oh, wait, maybe, ohmygodohmygodohmygod BAM! Another one. 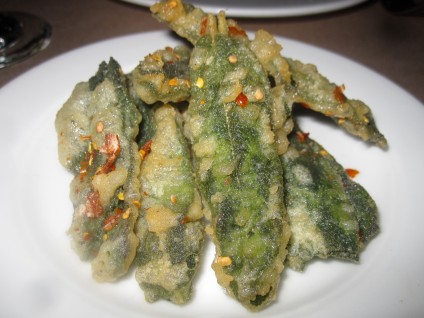 First up was one of the “bar snacks” and specials for the night: sage and anchovy crisps. Each individual sage leaf was spread with a thin layer of anchovy paste and then fried in a delicate coating of tempura batter which was then sprinkled with red pepper flakes, so that every bite had a surprising crispy explosion of flavors and textures. At first it was almost like Pop Rocks —a light, crispy snap on the tongue— but then it changed to the creamy saltiness of the anchovy with the almost minty, earthy flavor of the sage, before finally leaving a subtle lingering heat, courtesy of the red pepper flakes. So many tastes! So many emotions! Oh the joy!

But as good as that was, nothing could’ve prepared me for the ridiculous amount of crazy deliciousness that came after it. We had seen Devils on Horseback on the menu and didn’t know what it was and when the waitress explained “pear wrapped in dates wrapped in bacon” I damn near fell out of my chair. “WE’LL TAKE IT!” Seriously, I can’t do it any justice with words. These things are delicious bordering on the point of delirium. After popping one fat little roll of glistening, succulent bacon-wrapped pear and date I could have called it a night right there. The burst of flavors—sweet and savory, tangy and salty, juicy and caramelized— was like a shot of adrenaline straight to the tongue.

Pork belly, polenta and some greens

Then, were the entrees. Oh the entrees. Talk about walking a thin line between lust and gluttony. My hunk of pork belly  with polenta was worlds more intense than its simple title could ever suggest. It was unabashed in its flavorful fattiness, in its melt-in-your-mouth buttery softness, in that sinfully rich taste that coated my mouth. And the polenta, not to be outshone, went hand in hand with the pork belly, it’s creamy, smooth consistency complimenting the crispy pork belly and its fatty underside.

My offal loving partner on this culinary tryst went with the calf’s liver, which was soft and juicy and while it definitely had that liver-y taste, it wasn’t as prominent with the sweetness of caramelized cipolline onions underneath it. It would’ve been good as it was but to plant it solidly in the delicious category, there were crispy bits of bacon. Mmmm, what isn’t made doubly wonderful with bacon?

And to end the dinner on a sweet note Flaneur and I split the sweet love child of two of our favorite (and similar) desserts, the crema catalana and the creme catalan. The product of such sweet sweet-making? Creme Catalan. I’m not sure really how much it differed from either of the two original desserts, but really, I’m not that concerned. It was delicious and creamy smooth, with a sweet, milky vanilla taste and that crunchy, thin, crispy layer of caramelized sugar on top.

The walk from the Spotted Pig back to my apartment is exactly, and thank God, only two blocks long. I was so stuffed, so perfectly satiated, so in awe that so much deliciousness could be packed into  just about one hour of the evening, that I went to bed in a peaceful, happy, pork belly induced fuzziness and slept easily and deeply.