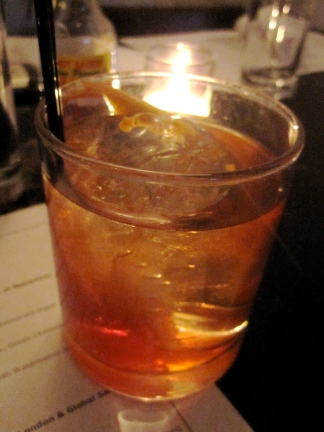 The Seven Gram Rock... yup, just what you're thinking

I don’t know about everyone else, but I for one, am ecstatic that this week is over. I mean really, it’s been relentless, and I’m filing it under “awful.”  But if there was one thing that stood out as a shining moment of awesomeness in this otherwise obnoxious week, it was Tuesday night’s 20/20 interview with Charlie Sheen. Yea, I said it.

I don’t care if he’s cracked out, completely bonkers or actually a genius. The man is hi-la-rious! A gold mine of outrageous ridiculousness and I can’t get enought of it!

Which is why I loved that Fatty Johnson’s in Greenwich Village, where I went on Thursday with some girlfriends, had a drink on their menu called the “Seven Gram Rock,” an allusion to the now famous quote, “I was banging seven-gram rocks and finishing them, because that’s just how I roll!” Yes! What a ridiculous individual. The other drinks, carefully crafted by guest New York City mixologists, sounded delicious, but in the spirit of Charlie, I ordered the Seven Gram Rock. Cause like Charlie, that’s just how I roll.

So what was in it? Dried peach-nectarine-apricot infused bourbon, cinammon, bitters, orange zest and essence of cocaine. I’m not sure about that last one, but all of the other ingredients came together in a great way to make for a zesty, smokey drink that was not too sweet, not too bitter, and just the right thing to drink on annnoyingly cold night on an annoyingly long week.

** A note about Fatty Johnson’s: This pop-up from the Fatty Crew is only open until Sunday, at which point it will close while they create something more permanent in its place. Color me excited.

Pro tip: a long sunny walk with friends to procure an assortment of delicious pastries from a new vegan bakery is an excellent way of staving off the Sunday scaries.