The whole world has been going bonkers with Royal Wedding Fever and I won’t lie, I’m right there with the craziest of them. I love all the hoopla surrounding this big day, and the hullabaloo (yes, I just used that word. Great isn’t it?) extends even to their fabulous lunch today. The menu (courtesy of CNN’s eatocracy blog) reads like this:

How awesome is that? Bubble and squeak! My favorite nonsensical British food name! So awesome! All of it! Today was indeed a good day to be royalty in England.

And as a final unrelated note, I’ll be taking some time off with my own Prince William look-alike to get some sun, see some friends and do some traveling.  I should be back in a week or so with some good stories and a deep tan. See you later!

My absolute favorite thing about Easter is Cadbury Creme Eggs (especially the Monday after Easter when they go on sale) so I was doubly excited when I saw a new version of the holiday classic at British goods market Myers of Keswick. Instead of the traditional egg shape, the Cadbury Creme Egg Twisted is more like a regular candy bar in that it’s long, but instead of being rectangular or segmented, this chocolate goody looks like the twisty shapes I used to make with Play Doh as a kid. Inside though, is the same sticky delicious cream with the yolky yellow still in the middle.

Literally a new twist on an old favorite. Thank you British Easter Bunny!

No eggs this Easter!

Dessert in a can... from across the pond

I work for a British company and spend the majority of my work days communicating with British people across the pond,  which means I’m constantly learning new things.

I’ve learned, for example, that the letters z and h aren’t pronounced zee and aych but zed and haych. I’ve learned that on a phone, the number sign (#) isn’t called a pound key, it’s the hash symbol. I’ve learned that grown people in the UK love Robbie Williams the way I loved Justin Timberlake circa 1998. And one that I had to learn the hard way unfortunately, was that you should never ever try to outdrink a Brit, because even if you manage to keep up, you’ll pay for it the next day.

Almost ready to be plopped out of the can

But recently at work, I learned something new. I learned about an oddly titled dessert, the sticky syrup sponge pudding, also known as treacle sponge pudding. What the bloody hell is that, you ask? Well, let me tell you, since I asked myself the same thing when someone at work brought it up. Syrup sponge pudding, so I came to find out, is a traditional British dessert. It’s  a syrup/molasses (or treacle as the Brits would call it) soaked sponge pudding.

I was curious about it and after one of my colleagues who once lived  in London confirmed its tastyness, I went in search of it at Myers of Keswick, a West Village British grocery store that sells everything from Cadbury chocolates (not just the eggs), to meat pies to something called a Cumberland sausage.

What I found was a Heinz brand sponge pudding, that strangely enough, came in a can. The directions said to toss the can in boiling water for about 30 minutes, then remove the lid, run a knife along the circumference of the can, flip it over and let the warm, sticky sponge pudding slide out of the can.

Even more intrigued by this point, I bought it and ran home to make it with Flaneur (who also did a stint in London but was unfamiliar with this dessert). After the cake (or pudding, if you will) slid out of the can, a layer of semi gelatinous syrup sat on top. The part below it was warm and soft, like the love child between a bread pudding and a flan. The flavor was cloyingly rich, with a taste that was part honey and part caramel.

Did I prefer it over a fat piece of brownie, a thick slice of cheesecake or a smooth slice of pumpkin pie? No, not at all, but it wasn’t about that. It was about learning something new, trying something different and expanding my dessert-eating horizons across the ocean. 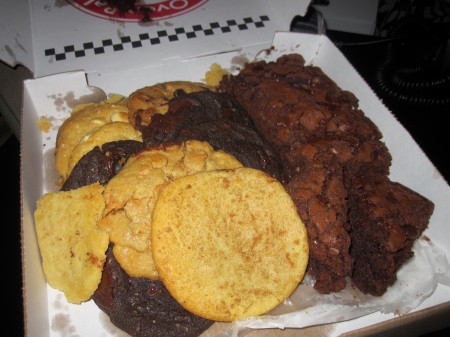 The Major Rager (yes, it really is called that)

Sometimes, I really love this ridiculous city. Where else could you decide, while riding a cab at the end of the night, that the cure to your late night munchies is to order, yes, to actually have delivered to your home, a box of cookies and brownies? Like it was a pizza! Like it was completely normal to have baked goods delivered to your apartment well past 2 in the morning! New York, that’s where!

The first time a friend told me about Insomnia Cookies in Greenwich Village, which delivers assortments of baked sweet treats well into the night, I thought, “Damn those NYU students. They don’t know how good they have it.” Sigh.

Saturday night, with Flaneur and a good friend along for the late night grubbing, we ordered the Major Rager, a cardboard pizza box full of fat chocolate brownies, chocolate chip, M&M and chocolate chunk, white chocolate and macadamia, chocolate with chocolate chunk, cinnamon sugar, and peanut butter cookies. We had milk, but if we  hadn’t, we could have ordered some from Insomnia, too.

Does it get better than that? Not late night when you’re hungry in the city that never sleeps.

Yes, I know that organic and locally sourced are the ways to eat, and sustainability and eco-friendly are words to incorporate into my everyday lifestyle and eating habits, but I can’t help it. When I hear too many of those tree-hugging, reduce-reuse-recycle words and phrases thrown together I can’t help but think of hippies and nature freaks, granola, steamed veggies and tofu. I know, I’m awful, but I can’t help it.

But never was that less the case than at ABC Kitchen, where I recently had dinner with a friend, after she managed to make a reservation at the consistently full restaurant. Everything, from the “reclaimed wood tables” and “soy based candles” to the “consciously sourced ingredients” was exactly the opposite of what I might have been hesitant about. I can’t say I was really surprised though. ABC Kitchen, located inside the massive ABC Carpet & Home store, is a Jean-Georges Vongerichten restaurant, and really what doesn’t that guy make awesome? 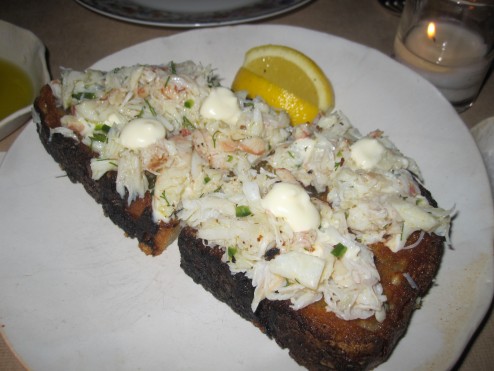 Because I was with a friend and not my allergic-to-shellfish boyfriend, I suggested we start with the crab toast from the market table section of the menu. A dark, nutty slice of toast was topped with sweet, meaty hunks of crab meat and a creamy, zesty lemon aioli. No tofu or granola in sight, just two very happy diners. END_OF_DOCUMENT_TOKEN_TO_BE_REPLACED

Go on and admit it, this is funny. And it's funny cause you've been there before.

Maybe you’re a broke college student, or maybe you’re a broke graduate, or maybe you’re neither but you’re still not the filthy rich millionaire you always thought you’d be by now, but whoever you are, chances are you’ve at some point or another found yourself face to face with one of these, a sodium-laden package of ramen noodles.  If you haven’t… well then lucky you. For the rest of us, Urban Outfitters has this hilarious ramen to make us feel just that much more embarrassed and ashamed for stooping so low.

Before I left the nest, the De Angelis household was always made up of my parents, my sister and I, and the occasional pet. But if there’s someone who could’ve counted as an unofficial member of the bunch because of her constant presence amongst us, it was Little Debbie. You know, the cutesy, snack-cake pushing girl on the boxes of Oatmeal Pies, Star Crunch and Honey Buns.

For the most part though, since becoming an adult, I’ve parted ways with Deb. Truth be told, though, I miss her. Which is why I was so happy to find out that Thomas Keller, of uber expensive culinary meccas The French Laundry and Per Se, had come up with adult versions of similar sweet treats at his boulangerie-style Bouchon Bakery. 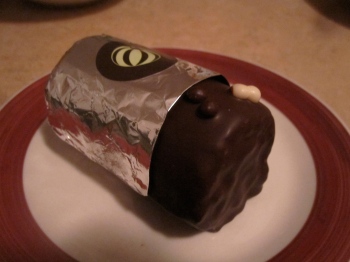 Perhaps my favorite Little Debbie treat of all time was the Swiss roll, a chocolate coated, rolled-up chocolate cake with cream inside. So when I saw a Bouchon Ho-Ho (a variant of the swiss roll), chocolate covered, foil-wrapped, and with the girth of a mini burrito, I knew I would need to get it. Debbie would have wanted it that way.  Added to my box was a palm-sized TKO, an Oreo lookalike, whose name I’m assuming stands for Thomas Keller Oreo, and two chocolate bouchons, sugar-dusted, cork-shaped mini brownies. END_OF_DOCUMENT_TOKEN_TO_BE_REPLACED

The Good Fork
Blog at WordPress.com.