Every now and then I meet someone who doesn’t like guacamole and it really just blows my mind. Unless you’re allergic, how could you not love guacamole?

Were you pelted by bullies with unripened avocados? Were your parents killed by a truck carrying a shipment of avocados? Does the green make you think of the time you were posessed and had the messy incident with the green vommit and the spinning head? What HAPPENED? 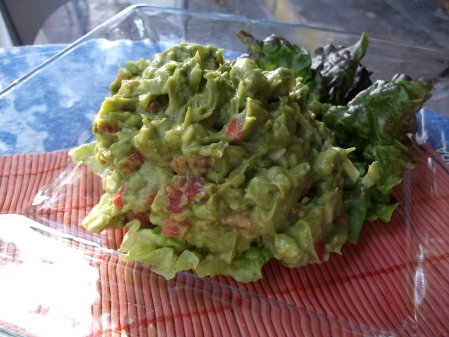 The best guacamole I've ever had

I love guacamole and would be perfectly happy eating it at least once a week from now until, well, always. Cause I just love it so. Which is why I was beside myself with gluttonous joy when we had the delicious heap of guac pictured above at a small, beachy cafe in Playa del Carmen called Caiman Tugurio. Flaneur and I were there for a couple of afternoon margaritas after spending the day lounging on the beach (God, I miss being on vacation) and decided to get something to munch on while we drank. Little did we know the guacamole at this unassuming, laid back bar would be the best I have possibly ever had.

It was chunky and thick with hunks of tomato and little sprigs of cilantro, yet creamy and smooth on the tongue. Whoever made it must have used a perfectly ripened, soft avocado because it had the wonderful, buttery taste of an avocado that just screams to be eaten. They also didn’t hold back on the lime juice which was a good thing because it madethe guacamole just tangy and zesty enough to almost demand being enjoyed with a margarita.

I’m pretty sure that this guacamole could make a believer out of anyone, even those random people out there who say they don’t like it.

Hot Girl Summer is over but maybe we can have a Hot Girl (guy/other) chicken sandwich moment, because I’m here to confirm that the new @popeyes chicken sandwich with @theestallion Hottie Sauce is in fact, every bit as delicious as I had hoped it would be.