As much as I like Mexican food—and if you’ve been reading the last couple weeks’ worth of posts here, you know I looove it— I’m… dare I say it… kind of ready for a break. We were seeing just too much of each other there for a bit and I needed to back off for a while.  After a week in Mexico, where with the exception of a slice of pizza at the airport on the way out all we ate was Mexican food, the thing I was jonesing for once I was back in New York was Thai. And I had just the place in mind.

Kin Shop, a small West Village Thai-inspired restaurant from Top Chef Season 1 winner Harold Dieterle, had been on the to-do list since it opened last fall. It’s not strictly Thai in the traditional sense, but instead uses a lot of the same spices, flavors and cooking styles to create food that has that same exotic deliciousness.

A few weeks ago at a different restaurant with different cuisine, I had a dish with squid ink in it and it had been amazing so with the thought of that still on my mind, I started the night at Kin Shop with the squid ink and hot sesame oil soup. As the name would suggest, the soup was inky and black, a pool of bubbling hot liquid from which swirls of of steam were rising and twisting out of. It was velvety and smooth with a taste that wasn’t at first sip spicy but left a lingering heat and back-of-the-throat tickle. It’s not cold anymore (because yes, our 5 minutes of spring are over and summer has officially set up shop) but in the winter, this soup must be the stuff dreams are made of. 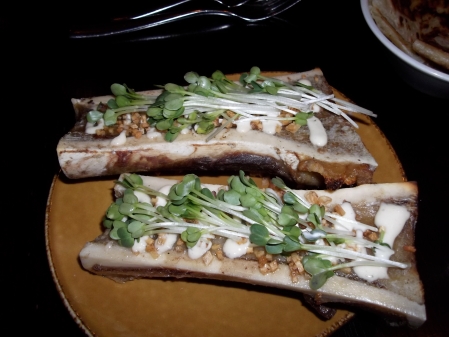 Flaneur, who will do cartwheels and somersaults for osso buco, went for the closest thing to it at Kin Shop and ordered one of the house specialties, the roasted bone marrow. What came out was a massive bone, somehow sawed down the middle and presented with both halves on the plate. It was a massive thing, beautiful but heavy looking, like something Fred Flintsone might have eaten on a special occasion. Underneath the sprinkling of sprouts and a creamy yellow bean sauce, the marrow was rich and buttery, the fattiness melting in your mouth in the most insanely gluttonous but eyes-rolling-back-of-your-head delicious way. Unlike my boyfriend, I could do without osso buco, but the bone marrow at Kin Shop was unlike anything I’ve ever had.

For my entree, I went with the massaman braised goat, a small mountain of falling-apart-soft goat meat with purple yams, shallots, mustard greens and toasted coconut. To go with it, a shared order of sticky coconut rice. I love massaman but I usually get chicken, so the goat was a nice change because of its extra rich meatiness. The rest of it had a sweet but also spicy creaminess on the tongue even though the consistency was thick and chunky with the different ingredients. It was a portion easily shared between two people and I wolfed down the whole thing. 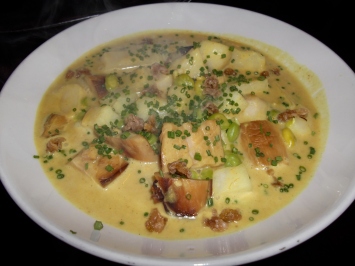 The beau also got something from the noodles and curries section of the menu and went with the sour yellow: roasted king oyster mushrooms. Like the massaman, Flaneur’s main was a thick, creamy, hearty dish of fat chunks of mushoom (cause as we confirmed with the waiter, it’s oyster mushrooms, not oysters), turnips and a couple other ingredients in a rich, delicious, soupy sauce.

For dessert, we kept things simple and split a scoop of ice cream in the flavor of one of the things I love most about eating thai food: thai iced tea. It had the same herbal spiciness and coconutty sweetness of the drink but with a cold creamy element that made it the perfect thing to eat after this meal.