Most people who’ve only lived in New York for a short time and aren’t originally from the city or the tri-state area have New York bucket lists. They’re full of those touristy things that we want to do at least once just to say we’ve done them, and then never have to do again. (Or only do again the next time you have guests in from out of town who insist you do them again with them.) Examples: riding the boring-as-all-hell Staten Island Ferry, paying an arm and a leg to visit the Empire State Building, and meandering around Times Square like you’ve never seen electricity in action before. 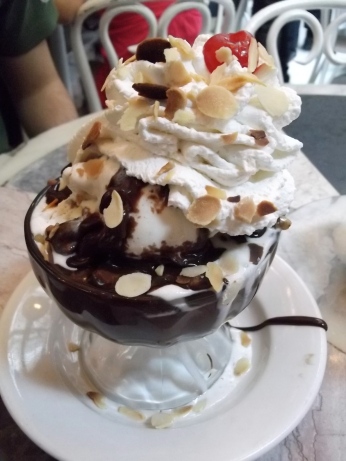 Along with all of these, one thing that’s been on my NY bucket list was getting dessert at Serendipity 3 in the Upper East Side. “It’s so overrated,” said the people who’d lived here before me. “There’s better ice cream elsewhere. Oh and it’s so expensive. Ugh. Total tourist trap.” I didn’t care. I wanted to do it. So I did. Just a bit after two years of living in this zoo.

Yes, it was expensive. Yes, it was a bit overrated. And yes, there certainly is better dessert and ice cream to be had in the city, but like buying hot dogs and pretzels from street vendors, going to the Top of the Rock, and seeing (and being disappointed by) Little Italy, getting one of the ridiculous sundaes at Serendipity was just something I had to do.

Flaneur and I split a monstrosity of ice cream called the Insanity Sundae, a towering mountain of tooth-achingly sweet, sticky pecan pie, creamy butter pecan ice cream, rich hot fudge, candied walnuts, sliced almonds, and at least a whole can worth of fluffy whip cream. It was probably the most appropriately titled thing I’ve ever eaten, and a small miracle that my teeth didn’t immediately rot and fall out of my mouth.

Do I want to eat another one again? No, believe it or not, I don’t really. But like walking around the Financial District, eating enormous pastrami sandwiches at Katz Deli, and crossing the Brooklyn Bridge, I’m ready to do it again if I have to.

2 thoughts on “Forget the dessert menu, I’ll order from the bucket list”

On the rare occasion that I walk by @ursula_brooklyn and there isn’t a line snaking down the sidewalk, I pretty much have to take it as a sign that I need to go in. It happened today and they had one of my favorite foods ever as a special: squash blossom quesadillas, this one with ricotta and dandelion green stuffed squash blossoms, green chile, quesillo, pecans and roasted corn and a great green chile tomatillo salsa. Kismet!