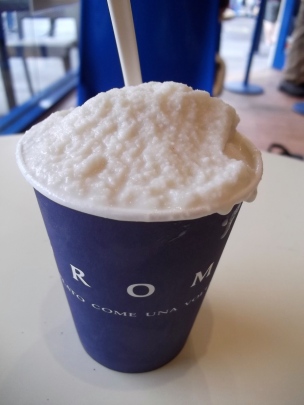 Gelato's great but I'll have a granita di mandorle, thanks

I’m now approaching week 2 of having an ocean between my boyfriend and I, and let me tell you, it sucks. No way around it. Beyond all the obvious reasons, I hate that he’s gone because of all the awesome food I know he’s eating in Italy without me.

I was in a particular funk the other day on my way home from work when I decided to make a pit stop to cheer myself up. When I lived in Florence, one of my favorite places for an afternoon snack was Grom, a gelato shop I didn’t realize was international until I moved to New York and saw it in Greenwich village. I was originally really excited about until I saw their outrageous prices, but on this particular day, I said to hell with it.

Now yes, their gelato is pretty damn good, but my favorite thing to get (the only one I ever get, really) is something else: the granita siciliana, a creamy, frosty treat (originally from Sicily, hence the name) similar to a slushy but infinitely better. It has a thicker, more coarse texture, and none of the wateriness. You get a spoon, not a straw, and with it, nothing but sweet, refreshing deliciousness.

It’s available in different flavors, but I’m not even sure what they are because I always get the same one: mandorle, or almonds. It’s sweet in a milky, nutty way that feels natural and not sugary. And because it’s subtly grainy but still icy cool, it’s really one of the best things to cool down with.

The beau might have Florence, but I at least still have my granita di mandorle. And that’ll just have to be enough to hold me over.

2 thoughts on “Granita for one, please”