Some people think I’ll eat just any ol’ crap. And you know what, that just isn’t the case. Just cause I love Twinkies and hot dogs doesn’t mean I don’t have a discerning palate, you know?

But yes, it happens, that every once in a while I will eat something totally random, often times gross, and straight out of the imagination of a hungry stoner, and will actually really enjoy it. Such was the case with the fried Kool-Aid balls I recently had at Cowgirl’s Baking, an East Village vegan bakery. Yes, that’s right. Read that back and let it sink in. Fried Kool-Aid balls at a vegan bakery.

I’d read about fried Kool-Aid balls a few weeks ago and thought, “Meh, not sure about that. Sounds gimmicky.” (Ahem, that’s that discerning palate, right there.) But then, when I met my vegan friend Katie for lunch one day, it turned out the place she picked was actually the one with the Kool-Aid Balls, and neither of us had realized it until we were there… in front of the Kool-Aid balls. Fate? Maybe. Gluttony? Always. 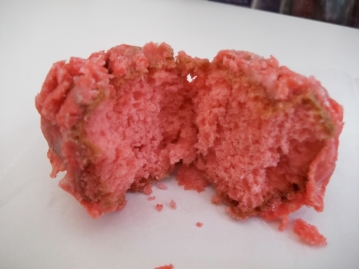 So much better than I remember Kool-Aid ever being

Curiosity got the best of me, and before long, there it was, sitting on a napkin: a lumpy, craggy, vegan, fried Kool Aid Ball, slightly bigger than a golf ball and reddish-pink in color.

I’m not sure what I was expecting, but it wasn’t what I got, which was soft, moist and sweet, with a subtle tart edge, like sour candy (or Kool-Aid powder, come think of it). The Kool-Aid mix is apparently added into a dough mixture which is then fried, so that in the end what you’re getting really is a doughnut of sorts (more like a doughnut hole, actually), with an extra sugary kick and a cheery bright color to match the taste.

These sweet treats are available in fruit prunch and grape flavored Kool-Aid, but I don’t know about grape. The idea of it doesn’t do anything for my refined taste buds. But those pink ones? I’m not too proud to admit I loved them.

*Oh and on a somewhat unrelated, but totally worth mentioning note: Cowgirl’s Baking is a great place for lunch, even if you’re not craving anything sweet at all. They have lots of sandwiches and savories, all of which are vegan, but easily enjoyable by even meatlovers (read: me). I had the vegan blackened fish tacos with a side of creamy guacamole and made-in-house tortilla chips. And in case you’re wondering, that was after the Kool-Aid balls.