Since my last post, which truth be told seems so very long ago, I waved adieu to September and the last vestiges of summer, turned another year older (and as the beau pointed out, got that much closer to 30), and ate a lot of really good food that I have regrettably not documented on this very blog. (Due to a bad combo of feeling lazy, unmotivated, and struck with mild writer’s block, in case you were wondering.) 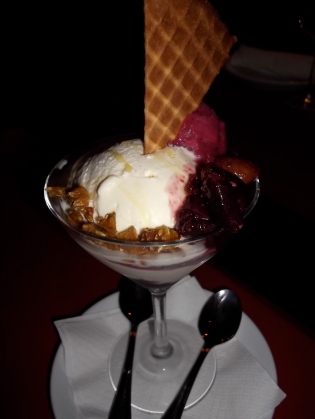 A bad picture of a good dessert

But I decided to interrupt my current funk to dish on a really great dessert I had recently at  Otto, Mario Batali’s Greenwich Village pizzeria. Yes, there was pizza before the dessert, and yes, it was delicious, but the dessert… oh, that dessert, it stole the show.

The olive oil coppetta, captured rather horribly in the picture you see here (thanks again, cheap camera bought at a Mexican Office Depot), was not just delicious but interesting too. Really! Every spoonful was like peeling back a new layer, getting a new flavor or texture. There was the creamy, smooth and slightly savory olive oil gelato next to the icy, tart concord grape sorbetto, mixed in with citrusy bright orange curd, plump, juicy figs roasted in red wine and a licorice like sweetness and candy crunch from the fennel brittle.  So many flavors, so much sweet deliciousness, so good.

I mean really, so good! Enough of this and I might just feel like blogging about all the other great eats I’ve been having recently. I’ll keep you posted.