Maya end-of-the-world prophecies aside, I think 2012 is gonna be a good year. I have no idea what it might have in store for me, but if my first meal of 2012 is any indication, things are going to turn out just fine. They’re going to be delicious, in fact.

Bleary eyed, with a slight hangover and a serious case of bedhead, the beau and I ventured out of the apartment well into the afternoon for brunch at Minetta Tavern (which thankfully I had had the presence of mind to reserve in advance since this particular Keith McNally Greenwich Village bistro is one of those New York restaurants with a charmingly obnoxious way of being impossible to walk into without a reservation.) 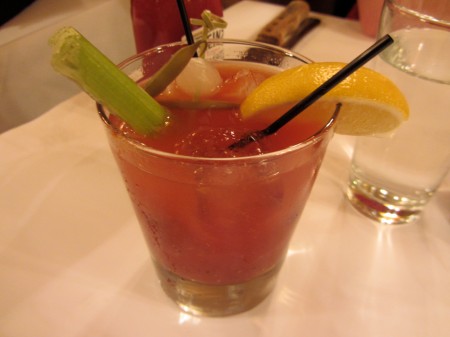 I can think of only a few better ways (most involving exotic locations and 5-star hotels) to start the year off than with a  hearty, restorative Bloody Mary. Flaneur looked horrified at the thought of more alcohol but I knew better. There were a few to choose from including a spicy version, one with oysters, and even a  full on soup sounding variety with oxtail broth and clam broth. A hungover stomach isn’t a great foundation for experimenting though, so I went with a classic Mary instead, just the right mixture of tangy, peppery, spicy and well garnished (celery, pearl onion and pickle? Score). 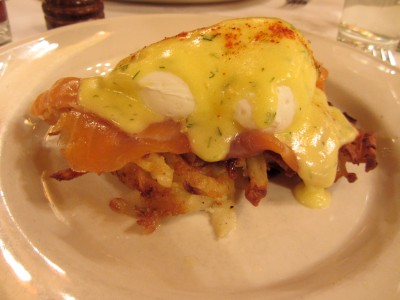 Admit it, these latkes make you want to lick the screen, don't they?

And while the hair of the dog is good, I needed food— latkes to be exact, which I had been craving for the past few days. (Maybe my Christmas overdose made me crave Jewish?) Minetta’s are like the love child between regular ol’ potato pancakes and eggs benedict. A crispy bed of grated potato topped with perfect slices of smoked salmon and two fat poached eggs, all coated in a rich, velvety yellow hollandaise sauce. Delicious? Yea. Ridiculously so. 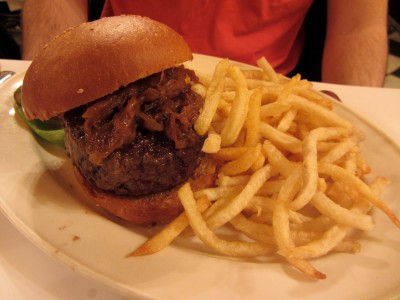 Flaneur, on the other hand, went for Minetta’s famed Black Label Burger. At a whopping $26, it’s said to be the one that started the trend of overpriced gourmet burgers, but after trying it I get what the fuss is about. The bun was soft, the meat juicy and dark red (how I like it…no, scratch that, how I looove it) and the fries, thin cut, crispy and salted exactly to perfection. Originally we were supposed to split both entrees but the burger was so good that I only got a couple of bites and that was it. The rest was wolfed down in great big chomps before I could protest.

I like to think that day one of 2012 was an omen for the rest of the year and hopefully all the good times to come. Maybe the Maya wouldn’t have been such debbie downers if they’d a nice brunch here and there.