Going “home” to Miami isn’t exactly comforting for me. It can be fun, yes, catching up with old friends, seeing family (in small, controlled doses), hanging out in my old stomping grounds. If I squeeze in some beach time, Miami can even be relaxing, but rarely, if ever, is it comforting. 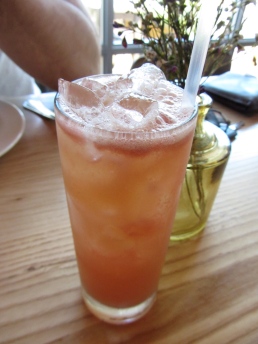 But during the last visit to my ol’ hometown, between long stretches spent trapped in the car thanks to Miami’s ever-present traffic (reason number a billion to live in a city with actual, functioning public transportation), I was able to find some comfort. As it often does, comfort came in the form of food. (Sorry, family.)

Eating at Yardbird Southern Table & Bar was one of only a small number of things on my “must-absolutely-get-done-while-I’m-in-town” list. I read about it a few months ago when it first opened and immediately wanted to go. when I read about southern comfort food staples like fried chicken, mac and cheese and cornbread. Miami may be south, but southern it definitely is not.

I loved Yardbird right away, with its country-cool, rustic vibe and a distinctly not Miami Beach feel. But when my Watermelon Sling came out, all sweet and refreshing with its crisp, clean mix of fresh watermelon juice, smokey borboun, lemon, orange bitters and a light, frothy cucumber foam, I was head over heels.

Then came the perfect follow up to my drink, melons and cheese, chosen from the small plates portion of the menu. Two fat wedges of bright, juicy watermelon were topped with a grilled cheese that the menu called farm cheese, but I thought was a lot like queso fresco, the white, salty cheese used in Mexican and other hispanic cuisines. Either way, it was delicious and further proof that mixing sweet (in this case, fruity) with savory, is always a recipe for tastiness.

Flaneur went with something we both agreed we hadn’t had in yeeears and as soon as we tried we asked ourselves why oh why had it been yeeears? Deviled eggs! Two boiled eggs (free range, no less) were split in half and filled with a creamy swirled, blend of yolk, briny capers, and pickled mustard seed. I think if I one day have to choose a food to eat as much as I could of, it might just be these guys.

When it came to entrees, the Blue Plate Special of fried chicken was a no-brainer for me. Served with a warm, crusty buttermilk biscuit and more refreshing watermelon (this time as a salad), Yardbird’s version was a perfect homage to the quintessential southern dish. The watermelon, which had bits of mint, basel and a citrus pepper flavor, was the ideal complement to the crunchy, salty fried chicken and the biscuit.

The Blue Plate Special: Fried chicken, watermelon salad and one of my faves, buttermilk biscuit

The beau, on the other hand, went the vegetarian route, which he never does, and ordered the vegetable pot pie. Instead of a traditional crust covering an inside of veggies in a thick jumble of deliciousness, Yardbird’s version had two buttermilk biscuits cut in half and covering the hot melange of mushrooms, potatoes, broccoli, cauliflower, spinach and fennel. Next to it, there was a salad made of field greens, corn beans and onions, all under a zesty lemon vinaigrette. Really, I can’t think of a more delicious way to meet your day’s requirement of vegetables. Miami parents take note: this is where it’s at.

By the time our spic-and-span dishes were taken away, Flaneur looked like he was about to burst. I felt full too, but after all that good food, there was no way I was leaving without dessert. I ordered the blueberry crumble topped with sweet corn ice cream and we agreed that the bf would have a spoon or two, though I knew good and well that he would end up eating more than that. And I was right, because there’s no way anyone in their right mind could stop at just one spoonful of this dessert. The crumble, which came out in an old-timey skillet, was warm and gooey with a rich tart, jammy filling and a crumbly, cinnamon-and-brown-sugary sweet crust. The sweet corn ice cream, all gentle sweetness and creamy smoothness, just played up all the best flavors in the crumble without being overpowering.

My trips to Miami are always too short, sometimes because my schedule won’t allow for more and other times because I just can’t handle more. But like the requisite visits with my mom and sister, and the catch-up sessions with old friends, big, southern meals at Yardbird are just going to have to be folded into the mix. Going home might finally be comforting.