While I might appear slothlike, I’m really not, and especially when I travel, I like to hit the ground running. Even after a taxi-flight-taxi combo, the extra added annoyances of flight delays, last-minute carry-on bags having to be checked, and spending almost 3 hours wedged into the dreaded middle seat, as soon as Flaneur and I got to our hotel in Chicago I wanted to go OUT. There was a restaurant I was itching to go to and the next day just wasn’t soon enough. What if I died in my sleep and never made it?

So instead of kicking back and relaxing,  off we went in search of The Purple Pig, a restaurant one of my friends in San Francisco raved about and insisted I go to. Next time I see this friend, I owe her a drink at the very least because The Purple Pig was ridiculous–in the best way. Fireworks and a parade wouldn’t have made for a better welcome to the city.

First out, from the antipasti section of the menu, were the fresh spring peas and bacon with spearmint. Fattest, most delicious peas I’ve ever eaten. I could eat this all day, every day.

Peas unlike any I’ve ever had.

From the salad portion of the menu,  rabbit panzanella with mixed herbs and lettuce, crispy capers, pickled fiddlehead ferns (that’s one of the curliecues in the left corner) and black truffle vinaigrette. Panzanella, a type of italian bread salad, is one of my favorite easy dishes but this took it to a whole new level. So many colors, flavors, textures. So. Much. Deliciousness.

A crazy heap of panzanella. Crazy good, that is.

Then from the fried items: sardines with shaved fennel salad and lemon vinaigrette. This is one of those dishes that makes you wish you were on vacation at the beach somewhere, maybe in Italy. But then when you realize you’re not, you’re still ok because you have these damn tasty sardines in front of you, and that’s more than enough. 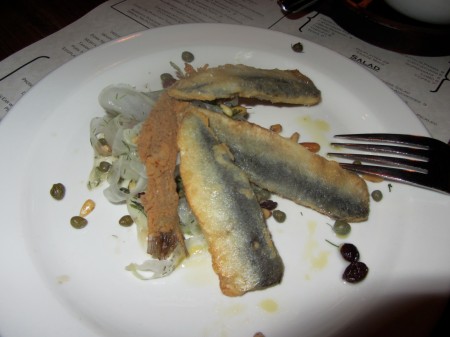 Next, from the a la plancha part: pork jowl and grilled asparagus with oyster mushrooms and fried duck egg on top. This was probably, no definitely, my favorite. The pork jowl was tender and meaty, and when that perfect, orange duck yolk spilled over it? I could have cried if I wasn’t busy stuffing forkfuls in my mouth. 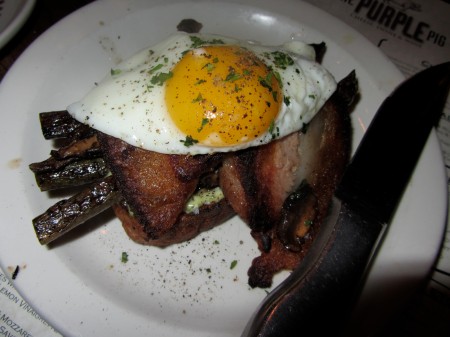 Pork jowl and fried duck egg. The people sitting next to us were blatantly staring at us while we ate this, food envy written all over their faces.

Last in our succession of savory eats, the pork neck bone gravy with ricotta from the smears section of the menu. A hearty, saucy, rich dish served with crunchy toast for smearing and dipping, this was a great example of what i consider comfort food.

Pork neck gravy and ricotta smear. As in, I want to smear this all over my mouth.

And then finally, dessert.  It wasn’t easy choosing but at the server’s recommendation, we went with the Sicilian Iris, a ricotta and chocolate chip filled fried brioche. Sounds magnificent doesn’t it? Oh, and it WAS. Something like a cross between a canolo and a bombolone, this thing was unreal. When it came it out, it looked like a round, fat, sugar-dusted donut but inside, it oozed, warm creamy ricotta with dark chocolate chips. Totally decadent, and so, so, so very good.

Sicilian iris: the sweet lovechild between the canolo and the bombolone

2 thoughts on “Pigging out in Chitown”