It always happens that when I’m either wolfing down a messy veal sausage and fried egg sandwich or shoveling mac and cheese into my mouth or throwing back chunks of fried pork belly like they’re gulps of fresh air, I think two things:

1.  Yup, it’s confirmed, I could ABSOLUTELY never be a vegan.

2. Ugh, why can’t I eat this every single day? (Quickly followed by, “Oh, right, cause I would be a mountain of lard.”) 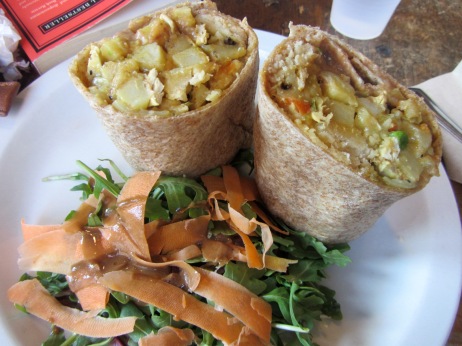 The “chicken” pot pie wrap at ‘sNice… my new favorite

But then recently, something awesome happened: I discovered the “chicken” pot pie wrap from ‘sNice, where I often order lunch when I’m at work. Let me explain, not only was this wrap the best thing I’ve eaten there (and ask my coworkers, I’ve pretty much had all of their sandwiches) but because of the quotation marks around the word chicken, this bad boy was VEGAN! A vegan “chicken” pot pie wrap! You know what that means? It’s a giant green light to eat one whenever I feel like it… with no remorse! One week I had it four days in a row. In fact, I order them so often that one time the nice folks at the ‘sNice on Sullivan actually threw in free muffins. (“Because you order all the time,” said the delivery boy.)

But really, not only are there no animal products in this bad boy (which again, takes away about a 100 percent of the guilt/fat factor) but it actually tastes good! It has the same creamy, saucy goodness of a regular pot pie, the same hearty chunks of potato, carrots and peas, and even the fake “chicken” (which I assume is tofu) is tender and flavorful. But best of all, because it’s a wrap and therefore doesn’t have the traditional pie crust, the crust is insiiiiide of the wrap, just as good and crumbly and buttery (but remember, sans the butter!) as in a regular pot pie.

Last week, because I’ve been on a new salad kick at work, the first thing I did on my day off was to have a pot pie wrap from the West Village ‘sNice near my apartment. And just like the other dozen or so I’ve had, I hoovered it.

But because the pot pie is a winter special, it’s only a matter of time before ‘sNice pulls it from their menu. And when that day comes I’m going to have a total meltdown and cry like a baby. And let me tell you, it’s probably going to take a good amount of bacon to get me out of that funk.

How to win at Monday.