You remember that old Ice Cube song, “It Was a Good Day?” (If you don’t, or worse, just don’t know it, take this opportunity to educate yourself on 90s West Coast hip hop, and thank me later.) Reason I bring it up is because aside from all the average-day-in-the-hood references, that song totally made me think of today, because today, you see, really was a good day! Today was Girl Scout Cookies day, most joyous day of celebration! 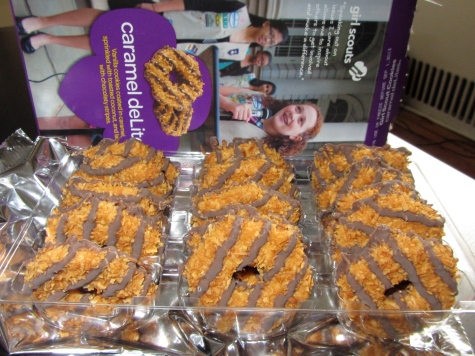 Doesn’t get much better than a fresh box of Samoas.

About a month ago, I placed an order through a colleague whose neighbor’s daughter was selling them (cause that’s how it works in the city) and BAM! today they arrived, my all-time favorites, the purple boxed, chocolate drizzled, coconut and caramel covered, ring-shaped Samoas aka Caramel deLites (depending on which of the two bakers used made them), officially making today a very good day indeed!

Oh Samoas, how I love you so.

Had it not been raining when I walked/skipped home from work, I would have torn into the box right then and there, but instead I waited till I was home on the couch to completely go to town on them. As usual, they were delicious and addictive, the perfect trifecta of my three favorite C’s: chocolate, caramel and coconut. I told myself I would only have a couple and six cookies later I finally forced myself to put them away, only so I would have some left for later.

The only bad part in my otherwise good day was that I didn’t think to order more Samoas and that I didn’t order any Thin Mints or Tagalongs. I might just have to make tomorrow a better day and order more cookies.