If I lived another healthy, active, one hundred years in New York, I still wouldn’t run out of things to do, places to go and lessons to learn here. (Florida, you can keep your cars and your backyards and your in-home washing machines. I’m not interested.) 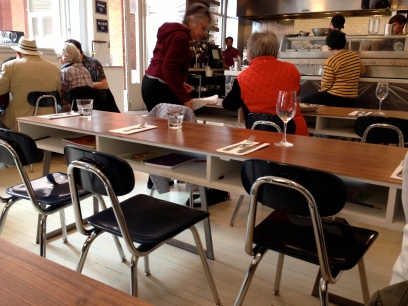 School is in session

Yesterday, for example, while playing tourist on my day off, I went to MoMA PS 1, what was once upon a time a school and is now a MoMA affiliated contemporary art center and exhibition space in Long Island City (just a few subway stops away from me in Greenpoint). Not only did I get to poke around a different part of town and check out lots of new (and bizarre) art, but I also ate lunch there at one of the most unassumingly cool places I’ve ever eaten at, M. Wells Dinette. 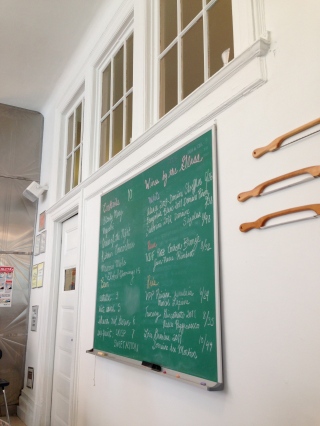 Because PS1 was originally a school, the dinette is set up like a classroom. Large green chalkboards with the menus and wine lists hang from clean, white walls, and instead of traditional tables or booths, seating is arranged in forward-facing rows of desks, the kind that have open drawers underneath for notebooks and pencils. Inside these open spaces? Actual notebooks and pencils, filled with diners’ doodles and scribbles.

My inner nerd was having a field day in the recreated school setting so it made perfect sense that it’s where I learned a new and somewhat surprising fact about myself: I LOVE veal brains. Yea, that’s right. Veal frakin’ brains. I had ’em and I loved ’em and I have M. Wells Dinette to thank for schooling me on the matter.

The were the server’s recommendation and seemed just unusual enough that I should get them, but I honestly never thought I would love them as much as I did. They were served a la grenobloise, which I learned (again, so much learning in one day!) comes from the French city of Grenoble and means preparing something in a brown butter sauce with parsley, capers and lemon. 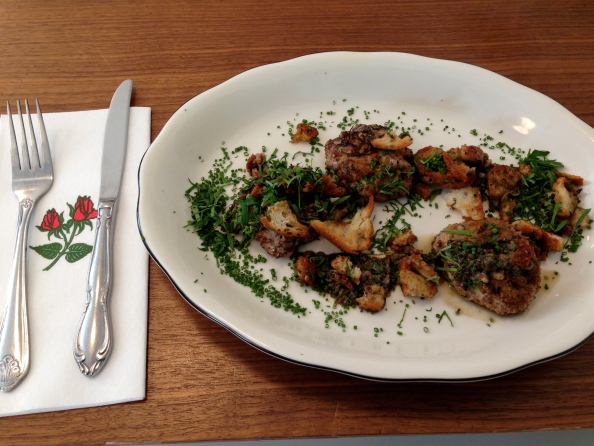 Veal brain grenobloise (and a super cute napkin just because)

I was a bit nervous that they’d very clearly look like brains but they didn’t, and instead resembled big, plump scallops, round and smooth, with golden, battered coats. Inside, the meat was hands down, the softest, most tender I’ve ever eaten. Combined with the velvety feel of the brown butter, each bite felt like it might actually melt right on my tongue. The lemon added a subtle zestiness and the capers a slight salty kick and to contrast with the pillowy softness of the brains, there were crunchy chunks of toast mixed in throughout. This will absolutely go down as one of the best things I’ve ever eaten.

Oh that all lessons could be so sweet as ricotta streudel

For dessert, I went with the ricotta streudel, which was bigger than I expected, taking up the same size plate as my entree, but also more delicate and light than I was thinking. Underneath the thin, crispy layers of pastry dough, the ricotta was thick and creamy, like a cheesecake but not as dense or overly sweet. To punch up the flavor, a warm, thick pineapple ring acted as the base for the streudel, adding a juicy, colorful sweetness to everything, while little cloud-like dollops of cream circled everything and gave the dessert a soft, fluffy quality.

I left PS1 happy and accomplished, once again thankful to this city that keeps on showing me new things.

2 thoughts on “A lesson in deliciousness”