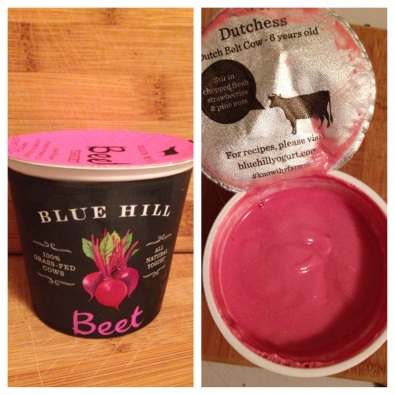 Tired of strawberry and banana yogurt? How bout beet?

I freakin’ love the stuff. I’ve told you this before. I can, and often do, eat yogurt every day, but usually it’s the same thing: plain greek yogurt with honey or agave. Last week, however, I heard about something new: savory yogurt, as in veggie flavored instead of fruit.

Blue Hill, as in the fine dining restaurant and upstate farm, just rolled out flour flavors of savory yogurt: carrot, tomato, butternut squash and beet, all available at Whole Foods. My first choice was butternut squash (because really, it’s like pumpkin’s cousin and pumpkin anything is always my fave) but it was the one flavor I couldn’t find. Tomato yogurt just didn’t seem like something I’d be into so I went with carrot and beet instead.

Looks like it could be mango yogurt, but nope, it’s carrot

Neither was my new favorite but both were interesting, and not at all bad for being vegetable flavored. The beet yogurt was subtly sweet, basically like beets themselves, but still tangy and just a bit tart, the way I like my yogurt to be.  The carrot was just a tiny bit less sweet but still not entirely savory.

I don’t know that I could make these yogurts part of my breakfast routine but they’d probably be good to cook with. Maybe in a soup or as a base for a salad dressing? Who knows, there could be a whole new avenue to explore my love of yogurt.