The four years I spent in Gainesville, Florida during college were filled with a lot of the same when it came to food: pizza (of the cheap, greasy, late night variety), burgers, pitas (Pita Pit what what!) and all manner of microwaved garbage when I ate at home.  So earlier this week, when I passed a large group of kids in Greenwich Village who I assumed were in town for NYU orientation (the purple “Class of 2018” stickers gave them away…and also horrified me), I thought about how nice it must be for them to have so many amazing food options, many—contrary to popular belief—not even that expensive. 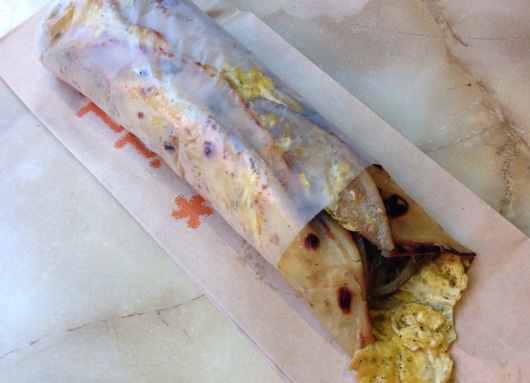 Think of it as the burrito’s Indian cousin.

Case in point: the cheap and so very delicious lunch I had at The Kati Roll Company on MacDougal Street, in the thick of all things NYU.

Quick, easy and tasty, what’s not to love?

Kati rolls are an Indian street food of sorts, basically different meats, veggies and other fillings rolled into crepe like flatbreads called paratha. I ordered the unda shami roll, a delicious rolled up mix of minced lamb, lentil croquettes and a thin layer of beaten eggs. The paratha was thick enough to hold everything but light and soft in taste and texture, and didn’t take away from the heartier, spicy filling inside. The spices in the lamb and in the lentil croquettes made for bright, rich flavors and the egg was just enough to give it a softer, almost buttery flavor without making it taste like a full on breakfast wrap. (Though I might point out that I would gladly eat this for breakfast, lunch or dinner.)

If I could do college all over again, I wouldn’t change a thing (because crappy pizza aside, my days in Gainesville were some of my favorite) but man, would it have been nice to have delicious things like Cambodian sandwiches, Ukranian pierogis, italian bomboloni and now Indian kati rolls. I hope all these new kids in the city know just how good they have it.

4 thoughts on “Lunch amongst the lucky ones”