Even though at the ripe old age of 30 I’m still not showing signs of improvement when it comes to cooking (just last week, I burnt—no, charred—turkey bacon to a black crisp) I still keep hope alive for learning.

When I saw an ad for cooking courses in Siem Reap I figured I’d try my hand at Cambodian cuisine, and see if I fared any better.

There were several to choose from, but I went with one at Le Tigre de Papier, a restaurant on the city’s buzzy Pub Street. Instead of everyone making the same thing, each of us was handed a menu and asked to choose an appetizer and first course we wanted to make and later eat. I went with mango salad (in hopes that I might easily replicate it at home) and fish amok, because I couldn’t get enough of it while in Cambodia.

First, we headed to the market where our instructor bought our ingredients, stopping at the different produce, meat and rice stalls to explain what the different ingredients were. Sanitation standards are waaaay more lax in Cambodia so I had to keep telling myself everything would be ok when I saw heaps of fish and chicken laying exposed while flies buzzed around, and not a single person handling food with gloves. Not ONE.

We headed back to the restaurant and upstairs to an open cooking class, where we donned red aprons and chef’s hats. I looked pretty dorky in mine, don’t you think?

Next, we were given the ingredients and instructions for our appetizers. In my case, green mango, carrots, and Thai basil leaves and lots of peeling and grating, something the instructor made look effortless but had my arms sore after 15 minutes.

After the arm workout came the ingredients for salad dressing (fish sauce, lime, soy sauce, some other good things), which we made for the table since it worked for my dish and a couple of other ones, like papaya salad, which several other people in the class were making.

Next, some of the ingredients for the amok came out and with them, more chopping and dicing. So. Much. Dicing.

But the arm workouts weren’t done. We each got our own mortar and pestle, which the diced amok ingredients went into, and then a serious pounding. I was sweating and my arms were achy, and when the instructor came by she said I still needed to pound harder.

Using a mortar and pestle might as well be a new workout trend.

After making some edible garnishes and the banana leaf holder for my fish amok, I massaged the dressing into my salad (yup, with two hands to really get in there), sprinkled it with some salt and crushed peanuts, plated it and put it aside.

Will you look at this beaut of a salad!

Then over to the oven, where I was given a pan to toss my pounded paste of amok ingredients into along with water, coconut milk, palm sugar and chopped fish. Over what felt like pretty high heat, I stirred and mixed until everything started to come together into a delicious looking, golden creamy sauce. 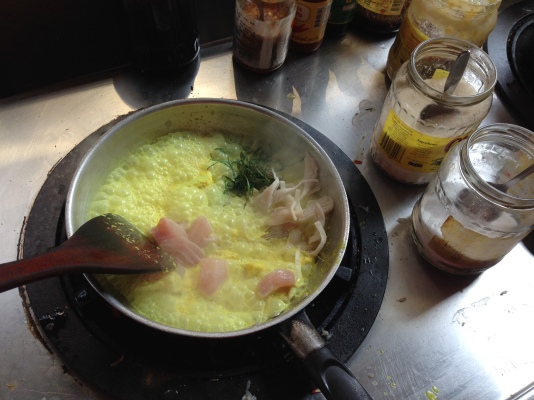 Now these, THESE were delicious smells!

As we each worked on our different dishes, a giant serving of mango sticky rice was made for dessert. I can’t say I paid much attention to the process but I know it involved rice, condensed milk, diced mango bits and coconut milk.

The mango sticky rice had a face… made of mango, because why not

A little mound of white rice came out to go with my piping hot amok and after some quick plating and garnishes, voila! A beautiful mountain (because it easily could have fed two) of colorful, zesty, bright mango salad and a thick, chunky and absolutely delicious fish amok, just bursting with the flavors of lemongrass, chili pepper, cumin and other ingredients.

I like to think my morning at Le Tigre put me one step closer to being a better cook, but the real challenge will be making this at home. Wish me luck!