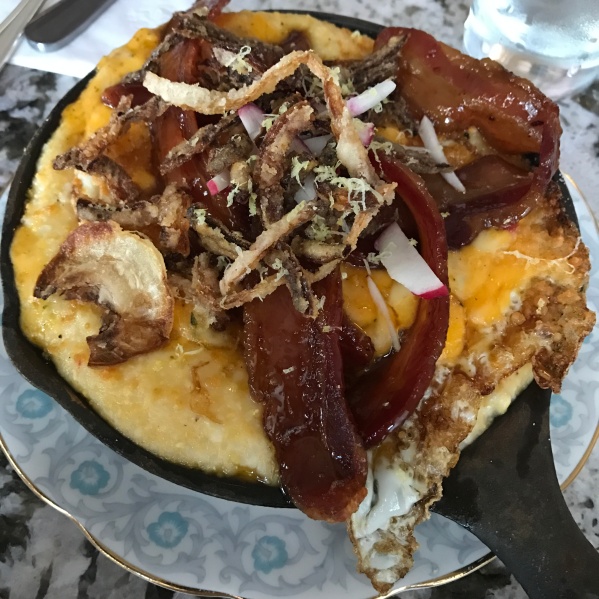 A delicious mess of baked eggs, maple bacon, crispy fried onions and coconut milk grits at Pretty Southern in Greenpoint. You won’t read about it beyond this but I wanted to show off this picture anyway, so here you go. Enjoy.

In trying to think of what to write here, what to say to explain myself for just falling off the grid again, I remembered a part in one of my favorite books, All Over but the Shoutin,’ by one of my favorite writers, Rick Bragg. (If you don’t know him, it’s ok to pause here and look him up. He writes these sentences that are so good they make my heart ache. No, really, I have actual physical reactions to his words. I met him once, when I was in college, and I was tongue tied, a sweaty palmed wreck, all over the way he strings together words to form sentences.)

In his memoir about growing up in the South, dirt poor in the foothills of the Appalachian mountains,  he writes about sleepwalking as a child and how his grandmother used to find him doing it.

But sometimes I would come to my senses outside and see her just standing there, beside me. I never cried. I just looked up, wondering. “You’re okay, little man,” she would tell me. “You just been travelin.'”

And that’s how I feel. That’s where I’ve been. Travelin.’ Not really in the way of actually going places, though there was a weekend in Canada with my sister, but more so just travelin’ through life, at times in that sleepwalking kind of way where you find yourself somewhere unexpected, a little dazed and groggy. That’s been life lately.

Today, for example, I woke up and realized it’s been eight years to the day since I moved to New York. All day I’ve been sitting here, figuratively rubbing my eyes, looking around at the life I’m living, the friends, the loves, the jobs, the ups, the downs it’s entailed, all of it.

I just looked up, wondering.

So yea, in the last few weeks, leading up to this anniversary, though not strictly related to it, I’ve been travelin,’ through my thoughts and my memories, through life. And sometimes when I do that, it doesn’t feel right to sit here and gush about the cheeseburgers and the pork buns, the very many mountains of ice cream, and let me tell you, there have been mountains. They’ve all been there, the food is always there. I just don’t always feel like writing about it. (Problematic, I know, for a self-professed food writer.)

All is well though, great even. It’s like waking up late on a Saturday to the smell of your roommate frying up bacon in the kitchen. It’s waking up exactly where you’d want to.

One thought on “Been travelin’”

My form of peaceful protest for having to be at the office when it feels like no one else was: eating a decadent pastry oozing with huckleberry jam and vanilla rice pudding at my desk.