I’ve been daydreaming a lot lately about living in a different city, and possibly because it was the last place I visited and because I loved it so much, my reveries have mostly been about New Orleans.

Get you a friend who can bake

I spent a week there with friends during the holidays and a few weeks after my trip, The New York Times released its annual 52 Places To Go list, and whaddaya know? New Orleans snagged the number one spot of places to go for “escaping into the world.”

That happens to be exactly what I want to do, but since I can’t at the moment, I’m mostly just going to daydream about it. And because no daydream about New Orleans would be complete without food, that’s where my mind often wanders.

Since we’re in the time of year after Epiphany (Jan. 6) leading up to Mardi Gras (Feb. 13 this year) known as Carnival, I wanted to get my hands on some king cake, a traditional treat served all over New Orleans this time of year. When I saw that Joy the Baker, one of my favorite food bloggers who also happens to live in New Orleans, had her own recipe, I had a better idea: solicit the help of my talented baker extraordinaire friend, Stas, and make one ourselves. 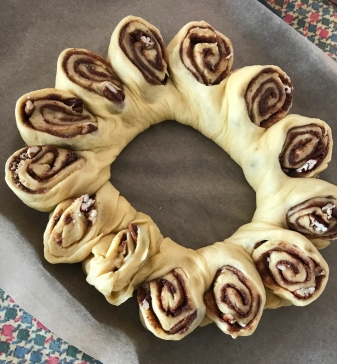 King cake in the making

She had most of the ingredients already (cause that’s just the kind of always-prepared-for-cake kind of badass she is) and I added the rest, mainly the fun accessories, Mardi Gras colored sprinkles (purple, green and yellow) and a historically accurate baby Jesus figurine.

King cakes are served in lots of other countries  (mostly the Catholic ones) and come in  different varieties but for the most part the New Orleans kind is a cinnamon roll-like doughy treat covered with frosting, and usually includes a small plastic baby hidden somewhere inside.

Stas had already made the dough when I came over, so we rolled it out and then made a mix of cinnamon, nutmeg and sugar to spread over it before sprinkling it with pecans, rolling the whole thing up and shaping into a giant ring. She then sliced it and twisted each slice so it made kind of a big, wonky looking flower, which we let sit for a bit before popping in the oven. Once it had risen and turned a nice, golden brown, we took it out, covered it in cream cheese frosting, topped it with the Mardi Gras colored sprinkles and plopped a little brown baby on top. (We didn’t hide him inside because we weren’t sure if he’d melt and we weren’t trying to do baby J like that.)

Unto them a delicious cake was baked!

It was deliciously doughy and sweet, the comforting smell of  cinnamon and nutmeg wrapping us up in a warm hug as we tore off chunks of cake and licked globs of cream cheese frosting from our fingers. Sometimes it just takes a good friend and a warm, fresh cake to put my reveries on hold and make me happy being exactly where I am.