Ok, I need to ask a serious question here for a second: where— WHERE!— has spaghetti squash been my whole entire life?

Listen, I own one of those little hand-held spiralizers and have actually used it a bunch. I’ve had zoodles and whatever else you want to call noodle shaped food really made out of vegetables and not good ol’ fashioned carby pasta. I’ve had zucchini noodles, carrot noodles, the squash-that-looks-like-a-yellow-zucchini noodles.

It’s not a great picture, but that’s fully MY fault, not the meal’s.

They were alright. Sometimes, buried under some delicious sauce usually reserved for bowls of pasta, they were even good(ish).  But they were never as good as the real thing. And they certainly weren’t ever something I would rave about and call the most delicious thing I’ve ever cooked.

But spaghetti squash, well ho ho HO, let me tell you… it’s blown my mind. Having it for dinner the other night, thanks to Plated, really felt like unveiling a magic trick. Cut the squash open, pop it in the oven, pull it out and scrape the inside with a fork, and  TA DA! BA DA BING BA DA BOOM! SHAZAM! a delicious, yellow heap of something that looks like noodles, but is in fact JUST vegetabley goodness. 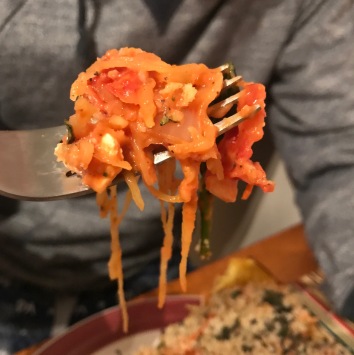 I kid you not, folks.

Plated’s recipe  had me make a delicious sauce from tomato paste, sun dried tomatoes, spinach, harissa, cream, garlic and onion which I then dumped the scraped out squash into along with some feta, and mixed together until it was perfectly coated and almost indistinguishable from a plate of angel hair pasta. I then spooned this delicious creamy sauce back into the scraped out squash shells and topped it with another mix, this time made of bread crumbs, parmesan, oregano, before popping it all back in the oven for another 10 minutes.

What came out of my oven was— no exaggeration— one of the best things I’ve ever made… which yea, I know, there’s not a ton of competition in that department, but still! Delicious, filling, vegetarian, and my new magic trick!

Pasta will forever hold a place in my heart, but since it also loves to hold a place in other parts like my thighs, I’m thrilled to have something to substitute it with every now and then that makes for just as delicious of a meal.

2 thoughts on “And for my next trick: spaghetti squash!”