Whenever my friend Stas has me over for dinner— or brunch, or afternoon baking, or really any time of day to have something she’s making— I’m always in awe, not just of what she makes (though I still absolutely daydream about the stuffing waffles she made a few Thanksgivings ago) but more at how she makes things.

She does it all with an ease that I, as someone who is always reading and re-reading the recipe out loud, washing dishes as I go, cursing vegetables to be chopped, and making lots of little mistakes along the way, envy very much. She makes it look so easy. I’ve never even seen a recipe in her kitchen. It’s like she reads them in private and commits them to memory. Meanwhile, I’m freaking out over whether something’s supposed to cook for 7 minutes or 8. 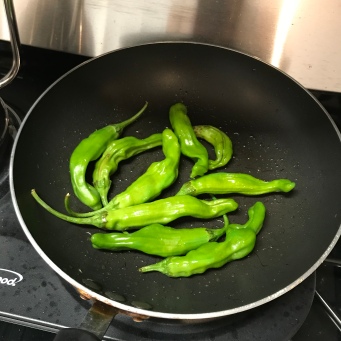 Shishito peppers seem simple enough, but don’t but it past me to overcomplicate anything in the kitchen.

So it was with Stas in mind that I set out last night to try something small that I’d seen at her place during a recent dinner party: shishito peppers.

I should note here that I freakin’ love shishito peppers, and I happily and routinely pay New York’s outrageous prices for them, because I love them so. It honestly never occurred to me that I could just make them at home, but that’s exactly what Stas did when she made them as a side along with anchovies on buttered bread, a lovely spatchcock chicken, and some made-from-scratch panna cotta among other things. Everything was great, but it was the shishito peppers that left an impression on me. They just looked so easy, so impossible to mess up, and in the end, as always, they were so good. 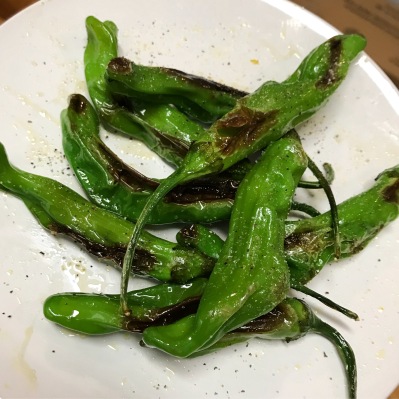 I kid you not, these were delicious. And SO incredibly easy to not mess up.

When I saw a bag at the store a couple of days ago I knew it was the perfect opportunity for me to channel Stas’s cool-as-a-cucumber approach to cooking something sans recipe.

Back home, I swirled some olive oil in a frying pan, remembering Stas’s instructions. I cranked up the heat, tossed in the peppers, sprinkled them with salt and pepper, and flipped them around for a few minutes until they were slick and blistered with just a little char on the outside before transferring to a plate.

And you know what? They were just as good as some of the $8 or $9 or $10 plates of shishito peppers I’ve had out at restaurants.

Yes, I’m aware they’re not really a whole meal (and don’t you worry, they were a side to my scrambled eggs for dinner), but I’ll have you know I felt very accomplished eating these little beauties. Sometimes you have to celebrate the little victories, too, and I like to think making these without panicking or Googling or stressing was exactly that.

One thought on “Little victories”