Every time I find myself waiting in some absurdly long line for something—which in NY is often since we’re always queuing up for a pastry or an art gallery or even Metro cards— I swear it’s the last time I’m gonna do it.

And then I go and read about a limited time only special collaboration Dominque Ansel breakfast sandwich at Shake Shake in the West Village and I think, “OK FINE. One more time. And then that’s it!”

Just a couple of days ago I read about the special edition egg katsu sando being sold only Friday and Saturday and until supplies lasted each day.  I knew there was no way I’d make it there on Saturday morning so I made a detour on my way to work instead.

They opened at 8 and even though I got there just before then, the line was wrapped clear around the block. It moved at a decent pace but once I got in and placed my order, I still had to wait (and wait and wait and waaaiiit) for my food. At one point I seriously considered just leaving because I hadn’t been planning on being that late to work, but like waiting for the train, I knew the second I left, my order would be called and I wasn’t going to let the system win this time. Not on a Friday. Not over a breakfast sandwich I’d already paid for and waited too long for.

When my name was finally called, I grabbed my to-go bag and plopped down at the first open chair I saw, because while the original plan had been to eat at work, that just wasn’t gonna happen after all that waiting (and all the stomach growling).

I snapped a couple of pictures and then took a huge python-eating-a-whole-alligator sized bite and thought with a flood of relief, “Oh thank God.”

The Shake Shake and Dominique Ansel egg katsu sando, a breakfast sandwich play on Japanese katsu (breaded cutlets) made with panko crusted steamed egg on fluffy milk bread and smeared thick with miso-honey mayo was absolutely worth the wait. 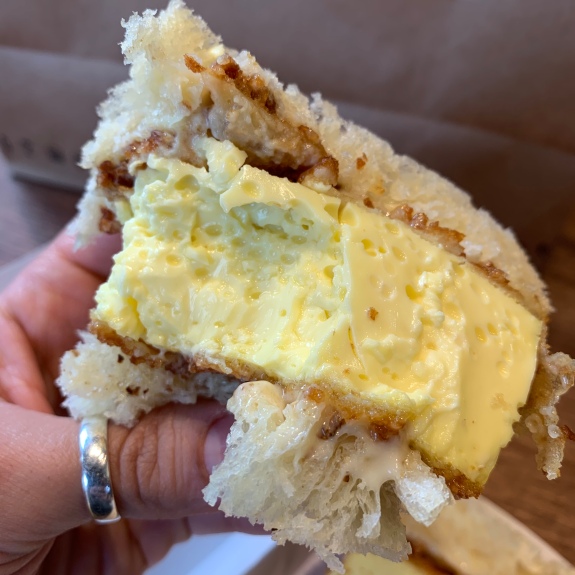 The super soft milk bread was subtly sweet and a great contrast to the crunchy, savory panko crust on the custard-like steamed eggs, with the miso-honey mayo adding a slightly tangy, sweet creaminess to everything. I’m not sure what kind of kitchen wizardry or cooking magic Dominique Ansel (who was actually there and working behind the line helping to crank out sandos!) used to make them, but those silky, steamed eggs, shaped into a delicious, thick hunk in the middle made this one of the best breakfast sandwiches I’ve ever had.

Based on how long it took from when I ordered to when I actually got the sandwich, I’m assuming this sadly won’t be a permanent new menu item at Shake Shack, but if it ever made another guest appearance there, I’d happily wait in that crazy line. Just one more time.

If you’re thinking that I’m on a never ending vacation, you’re only partially wrong. I’m still in Hawaii but went back to work remotely today, meaning I was at my computer at 3am. If you’re thinking this photo is over saturated like an Instagram filter from 2013, that’s because I’ve had several of these lovely drinks because previous sentence.