If during my few days in Chicago I had eaten at just one more pizzeria serving Chicago style deep dish pizza, I’m pretty sure my gravestone would now read, “Angie De Angelis, 1984-2012, Death by cheese.”

In visiting the Windy City, the plan all along was to stuff my face full of deep dish pizza, and let me tell you, stuff it I did.  For the sake of comparison, we had it twice in the four days we were there. The city has a handful of big names in deep dish pizza, several of which claim to be the original and all of which claim to be the best. Had I been there for about a month, I might have tried them all, but then like I said, I probably would have come back to New York in a coffin, reeking of cheese. 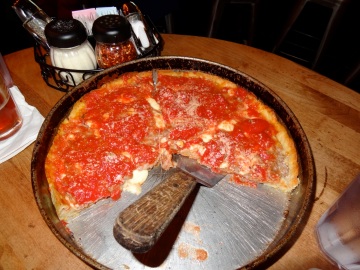 Our first pizza was at Lou Malnati’s (Gold Coast location) where we ordered the “Malnati Chicago Classic” in the over- ambitious 12″ size (meant to serve three people). It was already a behemoth of a pizza, made with the famed house buttercrust (hello, extra calories) and what seemed like at least a gallon of juicy, sweet tomato sauce, but in addition to the  several pounds of cheese that went into this bad boy, the 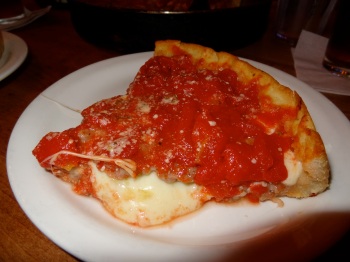 A fat slice of the Malnati Chicago Classic

Malnati Chicago Classic also had a layer of meaty, hearty sausage hiding just under the layer of tomato. It came out still in its pan, and we wolfed it down almost immediately, fighting through the layers of cheese and sausage to finish with chunky tomato sauce dripping from our mouths and hands like there’d been a pizza massacre at our table. Now, let me be clear about this: the pizza was delicious. Completely over the top, gluttonous and obscene, but delicious. However, I was in a complete haze after eating it. There wasn’t even room for dessert. No dessert! That’s insanity! I felt Thanksgiving-style full for hours and well into the night, waking up every few hours thinking, “When is this feeling going to ease up??” 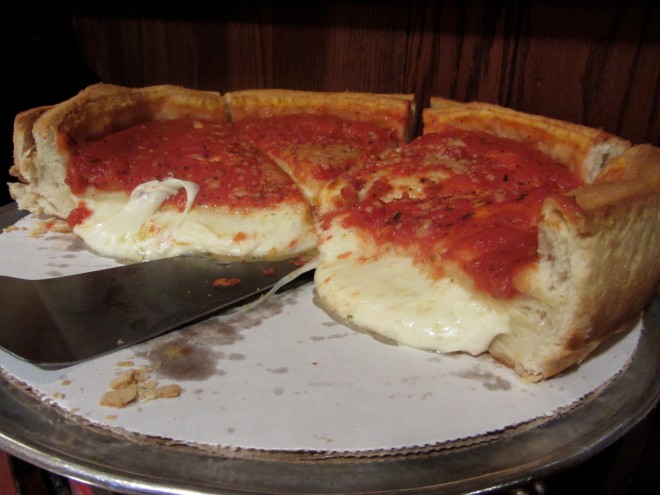 The deep dish pizza at Giordano’s, anyone other than serious cheese lovers need not apply

So you’d think that would be the end of it, right? But no. Like a drug, I needed more. So for round two of Chicago’s famed pies, we tried Giordano’s (near the Willis/Sears tower, though there are a whopping 43 locations in Illinois and even Florida). This time we went for lunch, figuring it would give us the rest of the day to burn off some of the tens of thousands of calories. Instead of bringing a topping into 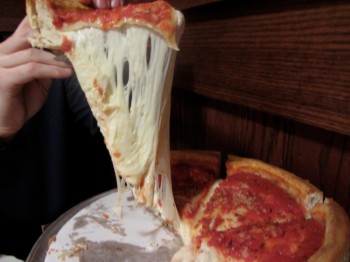 the mix, we kept it simple and had a cheese pizza. Not that there was anything simple or minimal about just cheese. As we lifted out the heavy slices of pizza, each at least a couple inches high, thick, gooey globs of creamy mozzarella slowly poured out. It was in-tense. Seriously. So. Much. Cheese. That night, we didn’t have dinner! That’s how intense it was. And those of you that know me, I don’t just skip meals.

Chicago pizza, you win. I held my own, but long term, I don’t think I could hang. You’re delicious yes, but you’d be the death of me.

There was an error retrieving images from Instagram. An attempt will be remade in a few minutes.