Sometimes, finding something healthy when you’re out to eat can be a real pain in the ass. You’re at a pub and the closest thing to healthy is a cobb salad. A friggin’ cobb salad for Christ’s sake! Everyone else gets bacon cheeseburgers and there you are, with your depressing cobb salad, dressing on the side, burning with food envy.

But then other times you get lucky, like I did in Miami recently, and the healthy choice ends up being the envy of the other choices.  With that afternoon’s memory of me in a two piece still fresh in my head, I decided to go for something healthy while out at dinner with my sister at The Standard Miami’s Lido Restaurant & Bayside Grill.

My sister, a 7-month pregasaurus rex, looked at me like I was crazy when I told the waitress I’d be having the living “lasagna” raw vegan vegetable terrine. 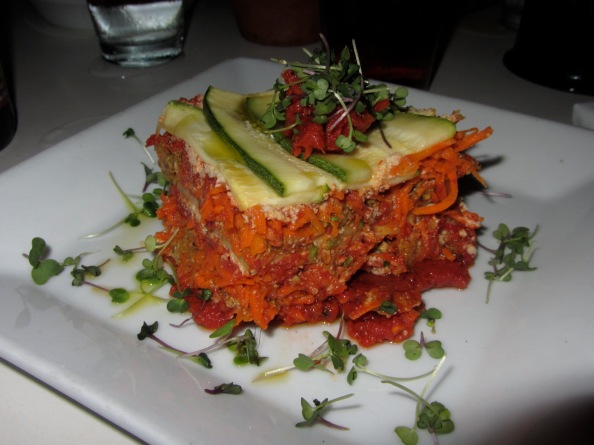 No pasta, meat or cheese in this “lasagna”

“I mean, I don’t even get what that is. Is it cooked? I’m getting a turkey cheeseburger.”

Truth be told, I wasn’t sure what it was either.

When it later came out, at first glance, it kinda looked like lasagna. It had the squarish, multi layer look of it, but upon closer inspection, there were way too many veggies and no sheets of pasta for this to be the real deal. My first forkful confirmed that there was, in fact, no pasta, no cheese, and lots of vegetables. But that first bite also revealed that this so-called lasagna was delicious! Thin layers of zucchini and squash were layered with eggplant, shredded carrots, lots of chunky, tomatoey goodness and what I later found out was a nut-vegetable “sausage” and cashew nut cheese to make this whole dish deliciously rich and saucy, and best of all, guilt free.

No sad salads here. This time, the healthy option was absolutely the best one.

Man oh man do I love the satisfaction that comes with crossing off things on my to-do lists. Even better still when that satisfying feeling of completion comes along with the happy, stuffed high of a great, big delicious meal.

Such was the case earlier this week when a friend and I finally, after talking about it over and over and meaning to go for the past year or so, went to Mission Chinese Food, the tiny, much-raved about Americanized Chinese food joint made famous in San Fran and now also located in the Lower East Side.

Dinner service starts at 5:30pm and hungry folks line up outside before the door’s even unlocked and neon sign turned on just to claim one of the few spots in the no-reservations restaurant. Right there in that line, was us, ready to scarf down our hipster Chinese grub version of an early bird special. Even though I hate early dinners, especially when the sun’s still out, I’d gladly do it again because the food totally, if you ask me, lived up to the hype.

To celebrate our success at A.) getting our acts together and finally making it to the restaurant and B.) actually getting seated right away, we ordered ourselves some drinks. The chili margaritas, with their orangey pink color, citrusy bite and toasted chili kick were the perfect way to start things off.

Food at Mission Chinese comes out as the kitchen finishes it and for us, first out was the mapo ramen, a generous bowl of fatty pork broth, seaweed, coddledegg, mapo tofu and ramen noodles. Like many of the dishes here, this one wasn’t shy about being packed with bright bold flavors and a fiery kick that had me breaking out in full on nose sweats. (You know, when the bridge of your nose beads up with spicy food induced sweat. Not exactly my best look.)

END_OF_DOCUMENT_TOKEN_TO_BE_REPLACED

I’m gonna come clean about something: I kind of really don’t like Little Italy. The spaghetti and meatballs (not Italian), the guidos (obnoxiously not Italian), the greasy haired waiters standing on the sidewalk trying to lure customers with “Ciao bella!” (Listen buddy, it didn’t work in Italy, it sure as hell isn’t working on grimey ass Mott Street.) All of it just bugs me.

But now that I’ve been to Parm, the Torrisi spinoff located smack dab in the middle of Little Italy on Mulberry Street, I’m willing to overlook everything I dislike about the neighborhood because here’s my next confession: I’m kind of obsessed with Parm. 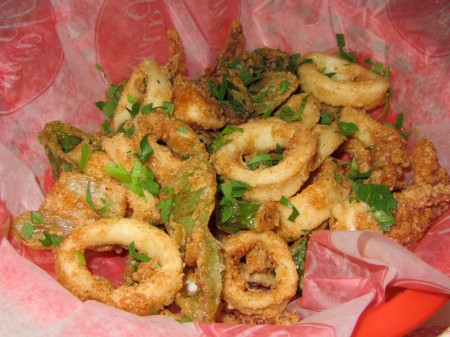 The best calamari I've ever had

When I was in college, I had a serious love affair with Krispy Kreme, especially when their famous “Hot Doughnuts Now” sign was lit up. When I walked into Parm and noticed they have a similar sign, this one advertising calamari, I got that same giddy rush.  The sign is modest though, because if it were up to me it would read, “THE BEST DAMN CALAMARI IN THE WORLD. HERE NOW.” Seriously, that good. Battered and fried to a perfect not-too-chewy or rubbery consistency, Parm’s calamari are soft and juicy with chunks of spicy fried peppers added in for an extra kick. And while it comes with the classic tangy marinara sauce, Parm’s also comes with a delicious Tabasco infused mayo. END_OF_DOCUMENT_TOKEN_TO_BE_REPLACED

Of the million-and-one places to eat in San Francisco the one I’ve frequented the most in the month and a half that I’ve been here is—wait for it… waaait for it—a vegan restaurant. Yup, that’s right. Me. Vegan. No cheese. No bacon. Absolutely no trace of pork belly. None of it.

I should probably clarify, though, that the main reason I’ve been there more than any other restaurant is because it’s just around the corner and a 15-second walk from where I live, and they take credit cards (which always wins major brownie points from me.)

Loving Hut is a national chain of vegan restaurants, and while they all have a decidedly asian slant, each one has a different menu to reflect the culture and ingredients of the city it’s in. The one I go to is in Chinatown so most of the  menu, with the exception of the somewhat awkwardly named “western” page (featuring the likes of spaghetti and vegan hot dogs), is Chinese, with other asian countries represented as well (shout out to Vietnamese pho).

This particular Loving Hut has a lunch special I always see advertised, but since I’m never around during lunch time, I never get it. (I’m usually there on weeknights when I don’t have anything to eat at home and am feeling lazy.) On Thursday, though, I had the day off so I decided to take advantage.

Eggplant and tofu, mushrooms and green beans, and white rice

END_OF_DOCUMENT_TOKEN_TO_BE_REPLACED

Now that it’s officially summer, it’s all tomatoes all the time, (Ahem, same with Beyoncé) and @rachelgurjar’s blistered cherry tomato toast with lemony labne and anchovies (!!!) from @bonappetitmag might just be my new favorite way to eat them.