The past week or so has been all about adjusting to changes. I just started a new job so with that came a new office, new coworkers, a new schedule, and lots of new daily routines and processes to get used to. And while all of it’s been great so far, my favorite might just be the fact that even though my new office is only five blocks away from my old one, because this is New York I’m now in a whole new part of town: Koreatown!

So let me rephrase that: my favorite part about all this change is the new food choices I’m surrounded by! K-town’s a small neighborhood when you consider that it’s mostly just one block, 32nd street between 5th Ave. and Broadway, but it’s a pretty densely packed one when it comes to all the places you can eat and drink (and karaoke, if you’re so inclined).

Nothing says welcome to the neighborhood like a kimchi croquette!

Just last week I popped into Tous Les Jours, a Ktown bakery, for a celebratory breakfast treat (first week done!) and was faced with no less than one million things I wanted to eat. Luckily (for my thighs), I only had a few minutes to spare so I grabbed the first thing that looked interesting, a kimchi croquette, and practically inhaled it on the rest of my walk.

The croquette was doughy and soft and about the size of a doughnut, but because it was also fried, the outside had a crispy crunchiness to it. Inside, it was stuffed with warm, slightly spicy kimchi making this a savory treat that would be great for any meal or snack really. I’ve had lots of different croquettes in the past but none with a korean slant like this so I enjoyed it even more.

Based on my penchant for stress eating, and the fact that I’m going to be learning the ropes and juggling lots of new things at work, I think it’s safe to say there might be a few more kimchi croquettes  in my future.

Summer is almost here and I’m about as excited for its arrival as I am for my next dentist appointment. Still about two weeks off, I can already feel summer’s grip tightening around my sweaty neck, its stuffy hot breath on my face.

So this year, like the last, and every one before it, I’ll comfort myself in one of the best ways I know how: by eating copious amounts of ice cream and other cold treats.

I think I’ll live through the heat waves if I can have this little mountain of refreshing sweetness.

Last summer I discovered snoballs, a New Orleans spin on shaved ice, and now this year I found the Korean version, patbingsu, at koreatown’s Korydang. But while other forms of this frosty treat are usually just shaved ice and a flavor syrup, patbingsu way more than just flavored slush.

When I ordered the green tea version at Korydang, out came a cherry topped-mountain of green tea flavored ice cream, surrounded by mochi balls,  sweet red beans, and chunks of mango, kiwi and strawberry, all which were hiding the bottom layer of slushy, cool shaved ice, made a creamy green color by green tea syrup and one of my all time favorite ingredients, condensed milk. Refreshing, creamy and light, and mixing the different smooth, gummy, and chunky textures of the fruit and mochi toppings, this korean take on shaved ice was not only delicious, it was fun to eat. And when the summer months get really nasty around here, which they inevitably will sooner than I’d like, this is the kind of fun I’ll be looking for on those sticky hot days in the city.

Before living in New York, I’d only eaten dumplings, of the Asian variety specifically, a handful of times. But in the last year, what will be the New York chapter in the story of my life, I’ve eaten them dozens of times and all over the city. One of my favorite places, and the one I keep going back to when friends are in town, during long lunch breaks away from the office, on weekends, and just because, is Mandoo Bar in the heart of Korea town. END_OF_DOCUMENT_TOKEN_TO_BE_REPLACED

Most weeks, by the time Friday rolls around, I’m beat and like to unwind by eating. (Yes, I know…) Sometimes, like last week, I ring in the weekend with a snack like a cupcake or cheesecake (or both) and other times, like this week, it’s with a whole feast. The kind that makes you look around to make sure no one is watching when you undo the top button on your pants.

Korea town was just a few blocks from where we were, and a couple of restaurants on 32nd street, between Fifth Ave. and Broadway in the most concentrated part of K-Town, were on my to-do list so that’s where we headed.

Maybe it was because of the nasty cold rain steadily coming down outside, but the second we walked in to Kang Suh I felt that we had made the right choice. A great choice. A warm and delicious smelling choice.

The menu was huge, an encyclopedia of Korean eats and sushi. Two asian girls at the table next to us had a dozen different dishes, bowls and what looked like a skillet before them. I wanted to lean over and say, “Hey, would you guys mind ordering for us? Cause your table looks awesome.” But I didn’t. Cause really, that would be awkward.

So after lots of flipping back and forth through the menu, bargaining and strategizing with Flaneur, we were ready when the waitress came by for our order.

We decided to split an appetizer but before it came, a waiter came by with a tray full of small plates which he arranged across our table before walking away without comment.

“What is this stuff?”

From left to right in the picture, the first dish seemed to be some sort of hot peppers. So hot that Flaneur practically spit his out and said I could eat all them. (And I did.) Next, on the top was some sort of fish bits in a sweet teriyaki style sauce. The plate below it was full of tangy, slightly spicy cabbage leaves. The middle plate had soy sauce with what appeared to be scallions and possibly something else. (Garlic maybe?) Next to it on the top were some mixed pickled vegetable strips. Below it was something that tasted like shellfish and cucumber. (Flaneur’s allergic to shellfish so I never got a second opinion.) Finally, on the right was a broccoli type green veggie. I’m a little unsure about everything because like I said we never ordered it. It just came mysteriously with no explanation. But it was good and that was enough for me.

Next out was our appetizer, the tasty-as-all-hell mandoo gui. Fried to a crispy golden brown on the outside and stuffed full with beef, these things were addictive. Sometimes dumplings are greasy (if they’re fried) or have that rubbery, almost greyish dough on the outside but these had neither. They were pretty perfect if you ask me.

Flaneur’s entree came out first, but it didn’t matter because we /I had decided to split both main courses. Japchae, Korean starch noodles fried with vegetables and beef seasoned in soy sauce came in a giant mound and were delicious. It was hard to keep myself from shoveling it all down my throat in one sitting but I managed to restrain myself. 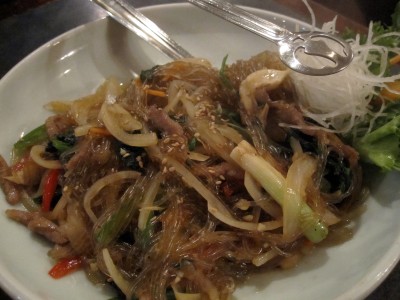 Next came my pick, which I have to admit was something I chose because it sounded a little unusual, like something I’d never had before: Heukyomso Tang, a spicy stew of black goat meat with pepper, sesame leaves and vegetables served with rice. It came in a black cast iron pot  with thick swirls of steam billowing out of it. One of those things that makes people at other tables look over and wonder what you’re eating. With the dreary wet weather outside, this was the perfect thing to be eating. 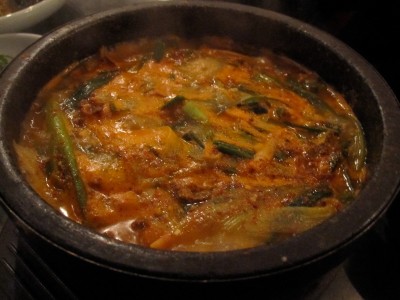 When we were finally done eating our table looked like a deserted battle field: all empty plates, abandoned chopsticks, stray noodles stuck to dishes, stew dripping over the side of the mini-cauldron. And then there was us, almost panting, bellies full, pants just a little tighter. Although the rain was unrelentling and I could see the wind snapping people’s umbrellas’s inside out, I was prepared to deal with the walk home. I was full and happy, just the way I like to be after my kick-off to the weekend.

Nothing takes the edge off a long week like a little booze. Which is why, even though the week was still one day shy of being over, I was psyched yesterday when a friend brought me a little souvenir from a lunch-time trip to Koreatown: a bottle of soju.

This was doubly exciting because first of all, I love trying new things when it comes to food and drinks. Soju, a Korean distilled beverage similar in taste to vodka, but usually made from rice, tapioca or in this case, sweet potato, was nothing I’d ever had before. (I Googled it. How did I live before Google? In the dark apparently.)

Oh engrish, you never cease to amuse me.

But best of all, this gifted soju was great because of its hilariously awkward bottle, complete with a busty Korean girl (I’m assuming that’s where she’s from) in a semi-skanky top, trying to entice the drinker with the words, “Feel~! So Cool” Everything else, aside from that and a small alcohol content description (19.5% alc. by volume) was in Korean. A classic example of grade-A engrish.

Had a swig after dinner that night and although it wasn’t anything mind-blowing, the label did provide for a good laugh and a funny photo op. Thanks, Chum Churum soju, I did “Feel~! So Cool”