I look back at my childhood and marvel at the fact that I managed to escape morbid obesity, what with my aversion to sports and the diet I grew up on. People are always blown away by this little fun fact,  for example, but I didn’t try milk that wasn’t vitamin D whole milk (i.e. chock full of fat) until I went away to college and started buying my own milk. For almost 19 years, there was never water, soda or juice with meals in the De Angelis house. Only milk. Whole Milk. Tall glasses filled almost to the brim with thick, cold, whole fat milk. Not just once a day, either. I’d say three times daily was a pretty solid average.

The most delicious milkshake ever

Things have changed slightly since then. I don’t drink whole milk anymore (unless I’m at my parents’ house where they still refuse to buy anything other than whole), but that doesn’t mean I don’t still have a fond appreciation for it. I miss it even, and if it wasn’t so damn fattening, I would still drink three creamy, thick glasses of it a day.

During a recent trip to Chelsea Market, milk once again asserted its magnetic pull on me  when I saw the Ronnybrook Milk Bar, a shop featuring all manner of dairy products from the upstate New York dairy farmer. Regular milk, chocolate milk, strawberry milk, buttermilk, heavy cream, half and half, tubs full of ice cream, cheeses, yogurt, butter and one of my all time favorite dairy products: milkshakes.

Putting fat counts and my expanding waistline aside for a moment, I was a kid again. Whole milk and ice cream, blended together into a thick, frosty cup of dairy perfection. I was sold. I went for the coconut and almond ice cream which was scooped into a blender with some creamy, cold milk and then poured, like liquid coconut and ground almond-flecked heaven, into a cup for my complete and utter enjoyment and childlike joy.

It was without a doubt the single most delicious milkshake I’ve ever had, rich and sweet, thick to the point of almost being its own meal, and probably insanely fattening. But you know what, if I had it for almost 19 years and turned out ok, what’s one more giant helping of caloric, dairy deliciousness?

I grew up with loads of junk food, TV dinners and all things fatty and American. My Italian boyfriend on the other hand, was raised on healthy eats like freshly laid eggs, homemade pasta sauce (never ever the stuff in a jar), and home-produced olive oil.

It’s an interesting dichotomy we have going. He’s all about organic produce, hormone-free meat and staying away from artificial sweeteners and MSG. While I’m all for healthy eating, I’m not as committed to the cause. I indulge in many a treat jam packed with all sorts of ingredients that are terrible for me, and I know it.  That’s just how it is.

But every once in a while, probably because of my bad influence, he surprises me. Of all the things on a menu, he’ll order the one I would least expect him to. That’s what happened recently when we went to Shake Shack, the always crowded, always smile-inducing delicious burger joint on the Upper West Side. 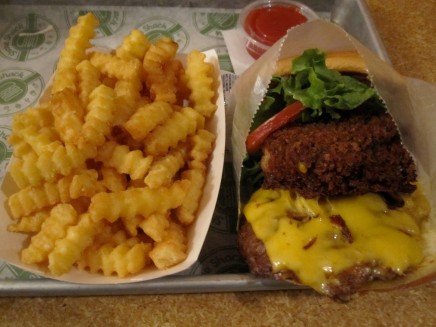 There's a whole lot of deliciousness going on here.

I ordered first: an order of fries and a small cup (which turned out to be a pretty large small cup) of frozen custard in the flavor of the day, “Bee Mine” (vanilla custard blended with strawberry puree, honey and rosewater). Then I slid over to let Flaneur order: a Shack Stack burger and a vanilla milkshake.

“What’s that?” I asked as my eyes scanned the wall-mounted menu, before reaching the last item on the burger list. “Shack Stack: cheeseburger and a ‘shroom burger topped with lettuce, tomato and Shack sauce.”

Wait a minute. What’s a ‘shroom burger then?

I was stunned. He was a getting a cheeseburger topped with a big, fat, cheese-stuffed Portobello mushroom on it, basically two sandwiches in once! And so much cheese!

The only way you're mouth isn't watering is if you're a vegetarian or blind.

After waiting and whining about being hungry, then nudging through the packed restaurant, and then staring down people who were done eating and just lingering around, we planted our tray at an open table in the corner.

The burger looked interesting, practically open-faced and oozing cheese from all angles, but there was no food envy from this girl. My fries were fantastic: the ideal size, color, consistency and above all, taste! And I swear I didn’t order them because the menu said, “100% free of artificial trans fats and made from Yukon Gold potatoes, 25% less fat than average fries.” (That was just a bonus.)

My frozen custard, a wonderfully thick love child of ice cream and soft-serve, was rich and creamy with a nice subtle hint of the honey and rosewater amidst the strawberry. And the color was sweet too: a shadowy pink, not the garish, Pepto-Bismol pink of so many other strawberry ice creams.

Flaneur’s vanilla milk shake, made from the same vanilla frozen custard used as the base for “Bee Mine,” was also creamy and dense, much more like something you’d eat with a spoon than through a straw. But it works out better that way. If it were any more liquid, the whole thing would be gone with the first slurp.

But the star of this show was without a question, the Shack Stack burger. The second Flaneur bit into it, his whole face lit up like a Christmas tree. It was a mouthful of happiness.

“You gotta try this,” he said, cheeks puffed out as he continued chewing.

I took the burger, not quite sure how to attack it so that I got a little bit of everything. I must’ve looked like a python about to unhinge its jaw and swallow a horse.

As I chomped down on the Shack Stack, the warm melted cheese oozed into my mouth and mixed with the juicy patty, the crunchy breaded Portobello and the tomato and lettuce, to make for one of the best burger mouthfuls I’ve ever had. And while it probably packed a mind-boggling amount of calories and fat grams, honestly, who even cares?

If my ever-health-conscious boyfriend did, I sure couldn’t tell.

Say what you will about America, but it really is a great country. After two years in Italy, a land overrun by ass-backwards behavior, I now have an empowered sense of patriotism for the good ol’ U.S. of A. A renewed appreciation for its ideals of freedom, justice and opportunity. But most of all, a sincere gratitude for one of its best attributes: the hamburger. 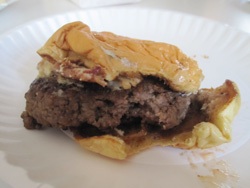 Got a little squished in transit, but still deeee-lish!

Now, that’s not to say you can’t find good burgers abroad. You can. They’re just better (and more prevalent) in the U.S. So when a weekend trip took me, the bf and a friend to our nation’s capital, it only seemed right to eat burgers while we were there.

Washington, D.C. has lots to offer: museums, monuments and Good Stuff Eatery. Vanessa, the friend who came with me this weekend, was the one who told me about Good Stuff, and well, I basically owe her a kidney for it. Started by Chef Spike from Season 4 of Top Chef, Good Stuff is a casual place with an easy menu: burgers, fries and shakes, with a couple variations on these standard American good eats.

A burger with no fries is just wrong.

So in honor of our being in the capital, I went for a burger named after its most famous inhabitant: Obama.  A juicy beef patty topped with applewood bacon, red onion marmalade, horseradish mayo and Roquefort cheese, all squished between two soft, buttery buns. The President might not have won everyone over, but the Prez Obama Burger? A landslide victory.

But no burger-eating experience would be complete without fries so we split an order of Sunny’s handcut fries. These were good- perfectly salted and just a bit soft, how I like them- but what made them great was definitely the mayo bar: chipotle, siracha, mango and Old Bay mayos to choose from, in addition to the standard ketchup, mayo and mustard. Naturally, I got all of them. 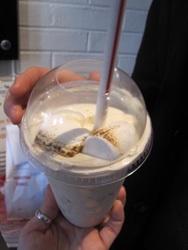 And last, but absolutely not least, was my favorite part of the meal: the toasted marshmallow milkshake. Thick and creamy, with a couple slightly browned marshmallows sitting on top, this shake was concentrated, glorious gluttony at its finest.

And in my book, that is always good stuff.

(Someone cue the Star Spangled Banner…)

Thank you @danielskurnick for making my Sundays so delicious. And for having such a wide selection of @tabasco products.