My boyfriend is leaving. Back to Italy he goes and with him the home-cooked meals he whipped up in our miniature kitchen. 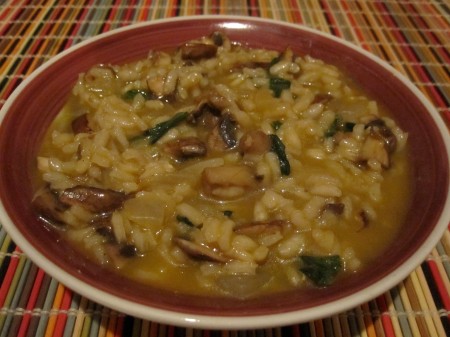 While I wholeheartedly love eating, the chances that I’ll put the time and effort into making mushroom risotto, home made pesto or spaghetti alla carbonara for one… well, they’re slim to none.

Every lunch I have from now until God-knows-when will pale in comparison to the meal I had Monday. The deli sandwiches, microwaved leftovers and salads that usually constitute my lunch will forever live in the shadow of what I had yesterday. The lunch I ate is what I might have answered to the question, “What would you want to eat as your last meal?” It would be the answer to that question if I sat and fantasized about it and dreamed up a menu of the most incredible ingredients and amazing dishes. It was better than a daydreamed answer. It was real and it was lunch at a New York institution, the original home of the power lunch, the Four Seasons Restaurant.

Thanks in part to a piece featuring the restaurant’s managing partners written in the magazine I work for, and part because of friends in high places (i.e. my wonderful friend who works there), and part to an all around aligning of the planets or divine intervention on behalf of the food gods, my friend Joe and I had the great honor of being invited to lunch at the Four Seasons Restaurant.

I’ll let the photos do most of the talking, but neither pictures nor words could really do much in the way of doing this food any justice. It was just too good. But I’ll give it a shot.

While each item listed under appetizers sounded better than the next, I knew immediately what I would order when I laid eyes on it: burrata and roasted beets. Burrata is a creamy white Italian cheese made from a mix of mozzarella and cream. When I lived in Italy I ate it whenever possible but this was the first time I had had it since I moved here almost nine months ago. Along with the soft juicy pear halves and the roasted beets, it was a magical reunion to say the least. 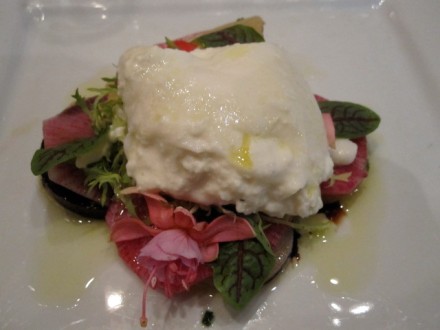 Burrata with roasted beets and pears

Joe opted for the day’s special: Spanish ham with white asparagus, grilled peppers and hearts of palm. (It should go without saying that of course I had a bite.) A great mix of colors, flavors and tastes.

Next up in our line-up of mouth-watering eats were the entrees. I ordered the Nantucket Bay scallops with black truffle risotto. I’m usually not crazy about scallops but these were like nothing I’d ever had before. And the black truffle risotto was on par with the best risottos I ever had in Italy. Best of all, this wasn’t truffle oil or truffle essence, it was whole flakes of delicious black truffles, with an aroma so good it was almost hypnotizing.

With some encouragement from me, Joe went for the bison filet with foie gras and black truffles. The meat, cooked to a perfect redish pink, was juicy and soft, and mixed with a bit of the foie gras and truffles, it really did almost melt in your mouth. Meat like this, while it’s not something I eat often, or ever really, is the kind of thing that keeps me from giving up meat. Passing up something so amazing would be like passing up sunshine. 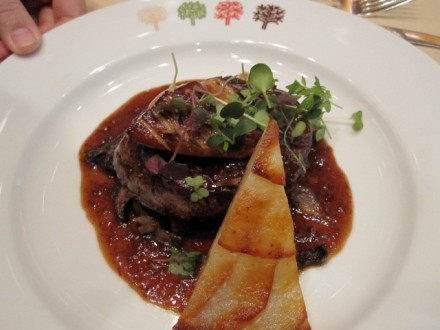 Filet of bison with foie gras and perigord black truffle

My favorite part of most meals is dessert, and while it’s practically impossible to choose a favorite from such perfect dishes as the ones I had here, the chocolate soufflè I ordered (on my friend’s recommendation) was definitely a contender. A soft, warm chocolate cake came perched on top of a porcelain dessert cup along with a small bowl of  thick warm chocolate. When he placed it before me, the waiter used a spoon to push in the middle of the cake, which he then filled with heaping spoonfuls of hot, gooey chocolate. This is the stuff chocolate dreams are made of.

Joe’s dessert, while listed simply as cheesecake, was actually almost three desserts in one. The cheesecake itself, coated in a soft layer of chocolate, was smooth and creamy, almost like a custard. It also came with a little glass of chocolate mousse topped with a soft, almost-frothy whipped cream, and a round little heap of what tasted like hazelnut sorbet. A fantastic end to a fantastic meal. 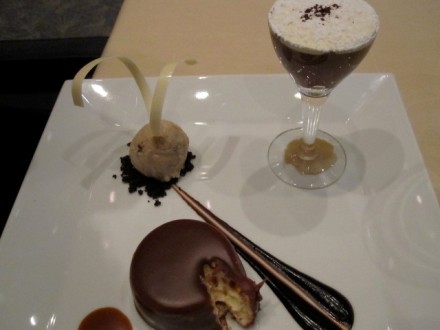 A very sincere thank you to the Four Seasons Restaurant, to my friend there whose job and daily lunch options I envy more than anything else now, and to the food gods who decided to shine all their good graces down on me and grant me one of the best lunches I’ve ever had.

There was an error retrieving images from Instagram. An attempt will be remade in a few minutes.